Songwriter Finds Music can be a Powerful Tool

By Steve Kent, editor in chief, in The Utah Statesman, Thursday, March 7

For singer-songwriter Sarah Olsen, music is more than a hobby or a major: It helps her make sense of life. Olsen, a senior in USU’s music therapy program, said music can be a powerful tool in examining and dealing with emotions.

“Music can bring unconscious material to a conscious state, so you can work through a situation by writing a song about it,” Olsen said.

Olson said writing music has been a therapeutic process for her. Most of the songs she performs were inspired by events in her life and written as she worked them out.

“A lot of times I don’t know what I’m writing about until I’m done, and then I’m like, ‘Whoa, this huge problem in my life was just solved,’” Olsen said.

This therapeutic approach to songwriting may have saved her future in music. Olsen said she had experiences last summer that made her doubt whether she should continue writing.

“This is kind of crazy as a music therapist, to think that I could be a music therapist and not write music anymore, but I felt like I didn’t have what it took to do this anymore,” Olsen said.

Then she heard an interview with musician Jason Mraz on VH1 Storytellers. In it, Mraz described his experience writing “I Won’t Give Up.”

“It really, really touched me,” Olsen said. “He talked about how his song is his companion, and I was like, that’s really what it’s about. It’s about me writing for me to help me, and so I started writing again and I kind of decided to just dive in and get it all out of my system. That really pulled me through this summer.”

Performing songs written about her personal life can be difficult, Olsen said, but the performance has therapeutic benefits. One of her songs, “I Don’t Live There Anymore,” is about one of the most difficult breakups she’s ever had but she said playing the song has helped her cope and move on.

“When I first sang that song I was pretty angry, and now I can sing it and just feel — I feel like it heals me the more times I play it,” Olsen said.

Olsen’s bandmates share her attitude toward music. Kellen Tew, a senior studying guitar education, said some genres of music such as blues focus on negative events to help people overcome them.

“The whole point, specifically with the blues, is you’re singing about things that make you sad, things are bringing you down,” Tew said. “The whole point is to put it in its place, and be able to relax — to not let it have power over you.”

Bandmate Sam Wright, a senior majoring in music, said music can be powerful because it combines multiple modes of communication.

Olsen’s performances in venues like WhySound and Caffe Ibis compliment her work in the classroom. Olsen said she participated in a practicum last semester, working with people with Alzheimer’s disease. The students helped some of the patients write songs and played familiar music as part of the therapy, and she said the results impressed her.

“A lot of them didn’t know their names when they came to the session and they’d be really agitated and really stressed,” Olsen said. “They didn’t know where they were, but you play a song that they knew from their childhood and they could tell you a story about it. Again, they may not remember after the session who they are, but they remembered for that moment, and it helps them connect with reality for that small time.” 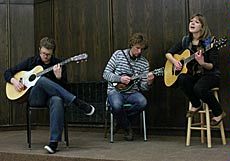