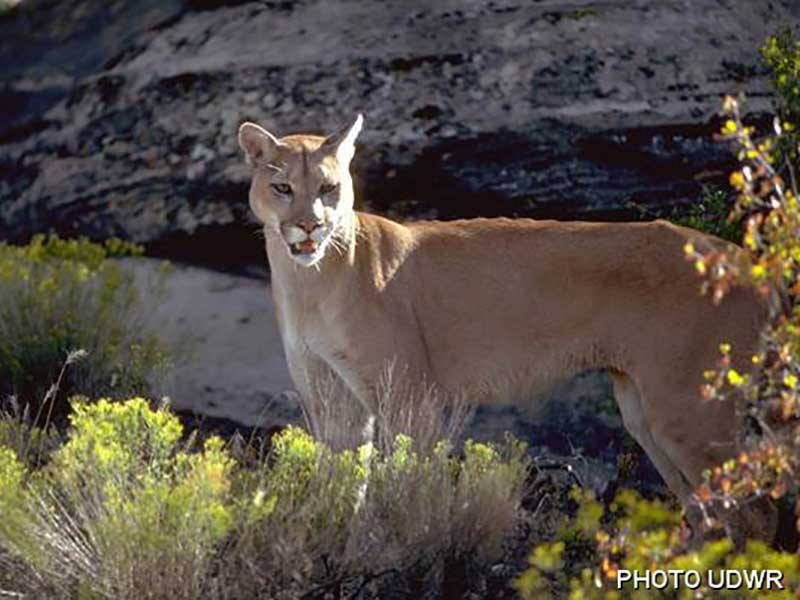 Utah is cougar country. The cougar, also known as the mountain lion, puma, catamount, screamer or panther, can be easily recognized by its tawny color, white muzzle and long tail.

According to Terry Messmer, Utah State University Extension wildlife specialist, cougars live all across Utah, from the high Uinta Mountains to the dry southern deserts.

“Although, cougars typically prefer pinyon-juniper and pine-oak brush areas where there are cliffs, ledges, trees and brush to use for cover, there have been more reports of people encountering cougars in areas where they have not seen them before,” he said. “The main prey of cougars is deer, so they may be found wherever deer are. Because urban areas in Utah are also inhabited by mule deer year around, more cougar sightings have been reported in these areas in recent years.”

Messmer said an increased number of cougar sightings have also been reported where there are urban wildland interfaces – areas of transition between unoccupied land and human development.

“The increased cougar sightings may be the result of more people recreating outdoors, coupled with seasonal movements and dispersal of the juvenile animals,” he said. “It is less likely that there are as many cougars in Utah as some might think.”

He said cougars are solitary animals that usually hunt alone at dawn and dusk.

“Be especially watchful during these times, because this is when humans are most likely to encounter them,” Messmer said.

According to wildawareutah.org, there are things you can do to reduce the risk of a cougar encounter:

Cougars are generally shy and typically avoid people and urban areas; however, if you do encounter a cougar, remember these tips:

Messmer said the cougar is a protected wildlife species in Utah. There is an annual statewide limited-entry hunting season on cougars in Utah. These hunts are managed by the Utah Division of Wildlife Resources to help regulate populations and reduce conflicts.

“If you have an encounter with a cougar or other aggressive wildlife, it’s very important to alert the Utah Division of Wildlife Resources office near you,” Messmer said. “If the encounter or sighting occurs after hours or on the weekend, contact your local police department or county sheriff’s office, and they can contact a conservation officer to handle the situation.”