In Lewis Carroll’s classic novel Alice in Wonderland, Alice asks The Cat, “Would you tell me, please, which way I ought to go from here?” The Cat responds, “That depends a good deal on where you want to get to.” Alice answers, “I don’t much care where,” to which The Cat concludes, “Then it doesn’t much matter which way you go.”
During the past 30 years efforts to determine the overall quality of America’s streams, lakes and rivers have followed a pattern of logic not unlike Carroll’s celebrated fantasy.
“The vast majority of waters in our country have been altered by human activity,” says Charles “Chuck” Hawkins, professor in the College of Natural Resources’ Aquatic, Watershed and Earth Resources Department at Utah State University. “But because we have no historical data to start from, we have no way to measure whether we’re making progress in cleaning up pollution or whether conditions are deteriorating.”
The Clean Water Act, initially enacted in 1972 and repeatedly amended, was an ambitious attempt to clean up the nation’s waterways. While the legislation prompted Environmental Protection Agency-enforced regulations to halt discharge of pollutants directly into waters from industrial and publicly owned treatment works, the law did little to address effluence from so-called “non-point” sources, such as run off from farms, streets, yards and recreational areas. More than three decades into the CWA, which envisioned eliminating water pollution by the 1980s, tens of thousands of American lakes, rivers and streams are unsafe for swimming and fishing. Further, as originally drafted, the CWA offers no way of determining whether or not its efforts are fulfilling its mission to clean up the nation’s waters.
In Utah, the state’s Division of Water Quality 2006 303(d) List of Impaired Waters, its mandatory submission to the EPA under the CWA, includes the Colorado, Jordan, Sevier and Bear rivers.
The CWA emerged with a broad mission and goals, says Hawkins, who serves as director of the USU-based Western Center for Monitoring and Assessment of Freshwater Ecosystems. The legislation defined water quality in terms of chemical, physical and biological integrity.
“The first two are fairly straightforward,” he says. “You’re looking at such things as contaminants in the water, is there enough water, the temperature of the water and so on.”
Measuring biological integrity and even agreeing on what that term means is much more complex, he says.
“When looking at biological integrity, you’re asking such questions as ‘Can we eat fish caught in this river?’ ‘Do we see the types of critters one would expect to see?’ ‘Is this body of water meeting its intended use with respect to ecological resources?’”
Complicating the matter is that it’s up to states, not the EPA, to make the call on whether or not a particular water body is meeting its intended use.
“The CWA mandates that states clean up their waters, but each state’s specific standards and way of measuring biological condition can be different,” says Hawkins. “There’s been no way to make comparisons across state lines and hence determine if the CWA is accomplishing its original intent.”
Until now.
Hawkins was part of a small team of scientists who developed standardized protocols that enabled recent completion of the EPA’s first-ever nationally consistent assessment of the nation’s wadeable streams. “Wadeable” refers to streams that are shallow enough to be sampled without a boat. Called the Wadeable Streams Assessment (WSA), the study lays the groundwork for standardized measurement of the quality of varied water bodies throughout the country.
Hawkins’ role involved development of one of the two standardized measures used in the study to quantify biological integrity: the amount of biodiversity loss that has occurred at each sampled site.
Developing the assessment protocol involved a four-year research period, identifying more than 1,600 benchmark sites – areas of water undisturbed or relatively undisturbed by human activity. Hawkins enlisted the help of state and federal water quality personnel to locate candidate sites in 13 Western states. He recruited undergraduate and graduate students from Utah State and beyond to sample and categorize the sites.
Data collected from the sites were used in conjunction with information collected by the EPA and states at benchmark sites in the Eastern United States to develop standard measures of biological condition. Assessments were conducted at nearly 1,400 randomly sampled sites throughout the country to measure the overall biological health of the nation’s wadeable streams.
Lessons learned and the resulting assessment protocol are transferable across diverse environments, says Hawkins.
“Now, for the first time, we can answer the question, ‘What’s the status of biological systems in streams?’” says Hawkins. “We have a means of measuring biodiversity loss across the country – from rivers in Utah to the Florida Everglades.”
Before developing a standardized assessment, water policies were based on opinions, he says. “This gets us to a place where we have data on which to base decisions. One really can’t begin to strategize until you know the severity and extent of the problem.”
A draft report is available online from the EPA Web site.
Related Links:
Western Center for Monitoring and Assessment of Freshwater Ecosystems at USU
USU Department of Aquatic, Watershed and Earth Resources
USU College of Natural Resources
USU Water Initiative
Bear River Watershed Information
USU’s Utah Water Research Laboratory (UWRL)
Contact: Chuck Hawkins, 435-797-2280; chuck.hawkins@usu.edu
Writer: Mary-Ann Muffoletto, 435-797-1429; maryann.muffoletto@usu.edu 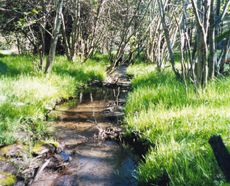 Mamie Creek, in the American Southwest's Four Corners region, was among the EPA assessment sites. 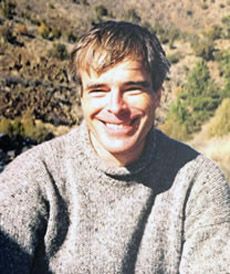 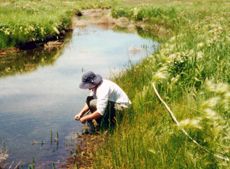 Student researchers took samples at hundreds of sites throughout the American West. 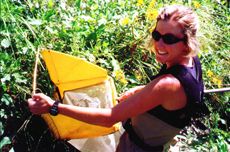 Dredging for macroinvertebrates - including aquatic insects and snails - at a sampling site. 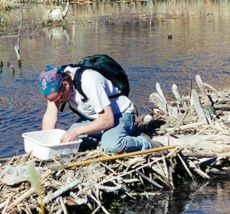 The project's assessment protocol can be used at diverse sites throughout the country to measure biodiversity loss.