The Great Salt Lake is a defining natural wonder of Utah and the American West. The massive body of water, about 75 miles long and nearly 35 miles wide, figures prominently in Utah travel brochures, history and lore. Yet the remnant of ancient Lake Bonneville, the largest natural lake west of the Mississippi, remains an enigma.

“The Great Salt Lake hasn’t been the site of as much aquatic research as one might think, as fish studies require significant time and resources,” says Utah State University undergraduate researcher Hannah Moore. “Yet there’s a lot of debate about what aquatic species actually live in the lake.”

One of the reasons for the mystery is the Great Salt Lake isn’t one homogeneous body of water, says Wayne Wurtsbaugh, Moore’s faculty mentor. The lake is actually composed of four distinct bays: Gilbert Bay, south arm of the lake and the largest bay; Gunnison Bay of the lake’s northwest corner; Bear River Bay of the northeast “thumb,” and Farmington Bay along the lake’s southeast banks and communities adjacent to Utah’s Wasatch Front.

“Each of the bays has different salinities and, thus, different biotic communities,” says Wurtsbaugh, professor in USU’s Department of Watershed Sciences. “That means each bay also has different management problems.”

Moore and Wurtsbaugh have teamed with Jim Harris, monitoring section manager of the Utah Division of Water Quality, on an impact study of a new wastewater treatment plant on Willard Spur, a section of Bear River Bay west of the Willard Bay reservoir. Among the team’s tasks are finding out what’s living in the ecosystem, so steps can be taken to appropriately  manage the area and protect aquatic life.

“The UDWQ went out of their way to help us,” Moore says. “Jim Harris took us to our study sites in an airboat and provided use of the division’s GPS equipment.”

To the team’s knowledge, Moore’s netting study, conducted at four sites in Willard Spur in October 2011, is the first of its kind.

“We have anecdotal reports of fishermen who’ve caught brown trout and walleye the area, but that hasn’t been confirmed,” she says. “Those captures could have actually occurred in Willard Bay, a freshwater reservoir.”

“It was cold and windy out there and my waders had holes,” says Moore, a senior fisheries and aquatic sciences major. “But the trips in the airboat were worth it. We had great views of a gorgeous sunrise, snow on the surrounding mountains and close encounters with lots of pelicans and other aquatic birds.”

And the nets did indeed yield fish.

Back at the lab, Moore will continue to analyze data from her field studies and share results and management recommendations with the division of water quality. She also plans to present her research at USU’s 2012 Spring Runoff Conference April 3-4.

Following graduation in spring 2012, Moore, a recipient of the College of Natural Resources’ Dean’s Scholarship and an American Fisheries Society scholarship, plans to pursue graduate studies in marine biology at Germany’s University of Bremen.

“During my undergrad career, I’ve had the opportunity to visit Australia, Europe and the North Sea, and the Bahamas,” she says. “My graduate studies could enable me to return to the Caribbean or conduct research in Micronesia or the Arctic.” 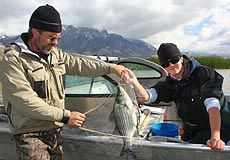 USU undergrad researcher Hannah Moore, right, and Jim Harris of the Utah Division of Water Quality, retrieve a 'wiper' - a white bass/striped bass hybrid – from the Willard Spur of the Great Salt Lake. 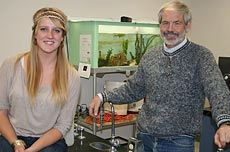 Moore and faculty mentor, Wayne Wurtsbaugh, are working with the UDWQ on an impact study of a new wastewater treatment plant on the Great Salt Lake's Willard Spur.