Watching a pack of wolves surround and hunt down much larger prey leaves most people with the impression that social predators live in groups because group hunting improves the odds of a kill. But according to findings by Utah State University wildlife ecologist Dan MacNulty, that explanation may not tell the whole story.

“What we discovered is that hunting success increased with groups up to four wolves then leveled off,” says MacNulty, who has been involved with the Yellowstone Wolf Project since its 1995 inception. “In groups of more than four, we observed that individual hunting effort decreased.”

“Hunting large prey is dangerous,” says MacNulty, who has observed wolves kicked, gored and stomped to death by elk and bison. “For that reason, wolves are very cautious hunters. There’s a lot of incentive to ‘hold back’ and let others go in for the kill.”

“As you might guess, parents generally take the lead because they have offspring to provide for,” he says.

But even in groups of able-bodied breeders, effort declines when more than four canids join the hunting party.

“It makes sense to look out for number one,” MacNulty says. “Given a choice, wolves will stay out of harm’s way until it’s safe to enjoy the spoils of the hunt. They’re opportunists. And this challenges the popular belief that wolves are highly cooperative hunters.”

He says abundant evidence points to similar patterns with many other animals, ranging from such diverse species as spiders to chimpanzees.

“Hunting success also peaks in small groups with other social predators,” MacNulty says. “But our study is the first to rigorously test this pattern and demonstrate it’s likely due to individuals switching from cooperation to ‘free riding’ as group size increases. Our study also suggests that social predators live in large groups for reasons unrelated to group hunting success.”

The team’s findings also offer insight into wolves’ behavior and their patterns of predation, he says. Such findings may assist efforts to prevent conflicts between wolves and livestock.

“Wolves are risk-averse,” MacNulty says. “Management that takes advantage of this behavior may be an effective way to reduce wolf predation on livestock.” 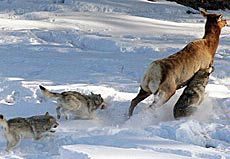 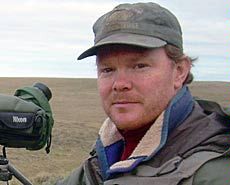 Research by Dan MacNulty, assistant professor in USU's Department of Wildland Resources, appears in the September-October 2011 issue of 'Behavioral Ecology.’