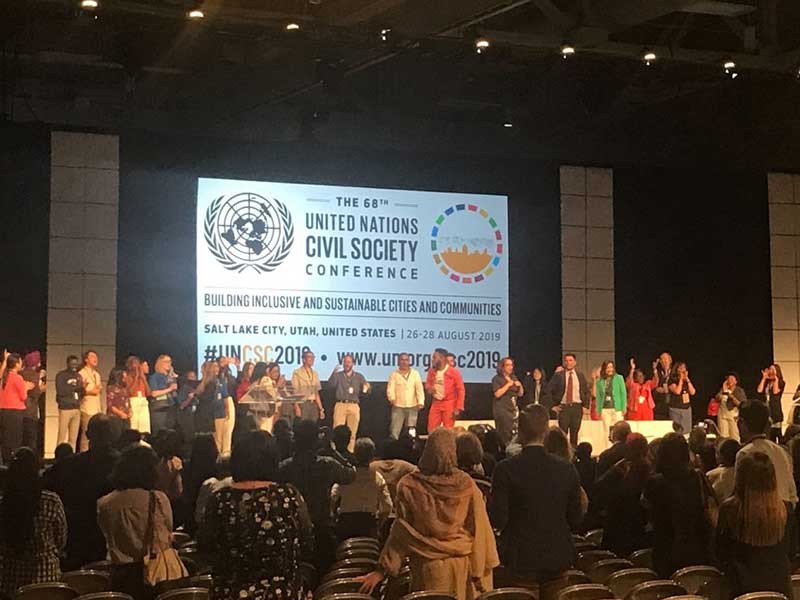 While most Utah State University students were focused on the start of the fall semester, some made their way to Salt Lake City, where the United Nations hosted their annual Civil Society Conference.

This is the first time that a location in the United States outside of Manhattan has hosted the event. This was a significant honor and Salt Lake City put in a lot of preparation for the conference.

Hosted at the Salt Palace, people from all over the world gathered to participate, learn and be inspired. A large room was devoted to booths from mostly local organizations and businesses promoting ideas to resolve issues related to the family, higher education and international law.

The rest of the conference consisted of a series of panels where experts in various fields presented their ideas and discussed solutions with the audience. For example, the importance of educating women and girls in developing nations and how to involve the world’s youth to slow the effects of climate change were both discussed during the panels.

Many locals jumped on the opportunity to be involved with such an event. Priscilla Vloe and Gloria Mensah, employees from the University of Utah, were both on committees to organize the logistics and content of the conference.

Vloe is affiliated with the GK Folks Foundation which Mensah founded. The nonprofit is based in Salt Lake and works with the local African community to provide needed support for refugees and youth.

Their passion fit perfectly with the theme of the conference, which was “Building Inclusive and Sustainable Cities and Communities.” This is not a simple task considering modern issues like urbanization and slums, environmental crises and immigration conflicts across the globe.

Hayden Hubbard, a recent USU graduate in economics, was impressed by how the presenters and panelists took different angles on the theme of the conference.

“That common thread was definitely prevalent throughout all the different meetings, so they definitely addressed that question. There was a very wide diversity of perspectives,” he said.

Dozens of non-governmental organizations, charities and other agencies and operations from around the world came together to share ideas and try to find solutions to the world’s toughest problems.

Mark Jenkins, an undergraduate student studying economics at USU, expressed his sentiments about the discussions this way: “There could’ve been more talk about what we’re actually doing and going to do, but the success was that we’ve come together, we’ve talked and we’ve had collaboration that we wouldn’t have had outside of the conference.”

Jenkins also noted the diversity found at the conference: diversity of ideas, opinions, nationalities, priorities and passions. He went about striking up conversations to absorb as much knowledge as he could from the people around him.

In Hubbard’s opinion, “It’s important for USU students, and anybody who wants to make a big impact on the world, to show up to these kinds of things to get their voice heard and to show that they’re serious.”

To learn more about the conference or efforts to build an inclusive and sustainable Aggie community, visit the U.N. website or the USU sustainability page.