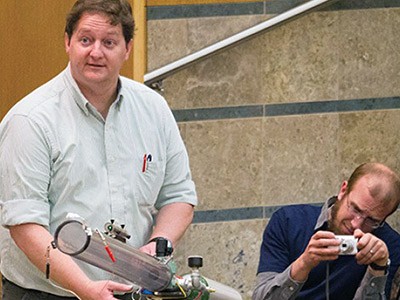 The Society of Physics Students busted myths ranging from testing the conductivity of water to microwaving diamonds in its own rendition of “Mythbusters” on Friday.

“Our main goal is to reach out to the public, because a lot of people that aren’t in the science-engineering kind of studies, they kind of don’t pay attention to the science things quite as much,” said Ben Pound, president of SPS and a senior in physics. “We try to reach out to people and help them understand a little bit more about the world and how it actually works.”

Aside from the chemistry-physics duel in the fall, this is the group’s largest event of the year, Pound said.

The event itself featured various myths and either proved them correct or busted them. The group evaluated whether a ping pong ball can break the paddle, if it’s possible to make diamonds in a microwave, the ability of air to crush a 55-gallon barrel and many other myths.

One of the featured myths tested was to see how safe someone is in their car during a lightning storm.

“We actually didn’t even try that one beforehand, and I’m really glad it worked,” Pound said. “It was really cool to see it go through the rubber and all of that.”

Risky myths were a favorite of the audience.

“We like the high-risk ones,” said Tonya Triplett, an adviser for the society and a professor at USU.

Though the group enjoyed the demonstrations, its goal was to reach out to the community and get others involved with science.

“As a greater goal of outreach, which SPS does a lot of, we have this goal to go out to people in our public and encourage — especially young people — to just study more science and take one more class to be ready to go to college and to jump in and know that this isn’t just for nerds,” Triplett said. “It’s fun and who wouldn’t love a good explosion?”

Along with holding events like Mythbusters at the university, the society has gone to other schools to perform demonstrations. One performance even lasted 12 hours.

Vanessa Chambers is the outreach coordinator for the group, and she has seen the impact that the group has made on students.

“It was fantastic,” Chambers said. “One kid — who I have no idea who he was — (said) the first thing when I walked through the door (which) was, ‘Your presentation was so cool, thank you so much,’ and another kid was like ‘I knew I knew you from somewhere. You were the one who came and did that science stuff.’ It was wonderful to finally get feedback because we hardly ever get feedback.”

The group saw more than 950 students that day.

Along with the work of the SPS, Pound wanted to thank others for helping make the event possible.

“I just want to thank the Science Council for helping advertise the event and supporting us financially a little bit and also the physics department, James Coburn especially, for his help with the demonstrations,” Pound said.

Events like this help the group promote its message for other students of all walks of life to get involved with science.

“The Society of Physics Students is not for just physics majors,” Triplett said. “We want everybody to come. We want education majors. Imagine the difference it would make if we took in education majors when we go to schools. We want engineering students. They add a wonderful depth when we build our demonstrations. We want every major to come and join us. We have room for them no matter how little or how much physics they know.”