The Student Life section of Utah State Today highlights work written by the talented student journalists at Utah State University. Each week, the editor selects a story that has been published in The Utah Statesman or the Hard News Café or both for inclusion in Utah State Today. Observant readers will note that both selections this week are by the same writer, a very busy Rhett Wilkinson.

By Rhett Wilkinson in The Utah Statesman, Wednesday, April 27, 2011

Allia Abu-Ramaileh strolls down a campus sidewalk wearing a soft, hooded scarf, an Aggie Ice Cream in hand, and receives both smiles and prolonged stares. Three years have passed since she decided to further indicate her devotion to Islam standards of modesty by donning a scarf designed to cover her hair. She now serves as the president of the Middle East Club.

"Just embracing it, while being a minority, is something I enjoy," she said about being Muslim in a region where most of her peers are Christian.

Over the years, fundamentalist Islam terrorist organizations have twisted their standards of belief, which has given Abu-Ramaileh a way to become close to her god, she said.

The majority of students interviewed on campus rejected the thought that "Islamophobia" — a term largely used by the national media to describe a pervasive fear or hatred of the Islam faith — exists at USU.

Recently, this issue has threatened to further lengthen its stride across the U.S. On March 28, three suicide bombers killed 20 United Nations workers in an uneasy province in southeastern Afghanistan, with the Taliban claiming responsibility for the assault. Thousands of other Muslims crashed the surrounding streets at the same time.

The violence and protests came in retaliation of Pastor Terry Jones and his Florida-based Dove Outreach Center Christian congregation burning several Qurans in the belief that the Islamic scripture "promotes terrorism."

On the eve of Sept. 11 last fall, Jones promised to restrain from protesting after several members of U.S. President Barack Obama's cabinet, including Secretary of State Hilary Clinton, made personal requests through the airwaves and even by personal phone call, pleading for the pastor not to do so.

It is the latest in a series of horrific events related to radical, fundamentalist Islam terrorist organizations which have occurred since the turn of the century. These occasions include the destruction of the World Trade Centers in New York, Sept. 11, 2001; the resulting U.S. combat which has ensued first in Iraq and then in Afghanistan; the four July 7, 2005, suicide bombings along the London transport system and the protest-laden saga last summer involving the construction of the Islam-based Park51 recreation center two blocks from Ground Zero. Such occasions remain poignantly and painfully fresh in many lives of individuals both American and across the world. Recent events have continued to perpetuate a putrefaction of what the national and local media and others describe as "Islamophobia," a hatred or fear of Muslims and their politics and culture.

Yet a variety of students interviewed on campus refused to pin such tragedies upon the Islam faith as a whole.

While three individuals admitted that they may have a more negative or fearful perception of Muslims following the retaliation in Afghanistan, all of the 14 non-Muslim USU students (nine men, five women; five seniors, three juniors, four sophomores and two freshman), randomly selected to interview about their perception of Islam and its adherents, said they had not seen a sign of "Islamophobia" at USU before.

Senior Alex Baldwin counts himself among that group.

"Honestly, I felt really bad for the Muslims," he said of a group which adheres to the teachings found in a book which Muslims believe to have been revealed over the course of 23 years to the prophet Muhammad. "I really don't support any kind of book-burning of any kind. I don't care what the literature is."

The English major said he was stunned to learn that Jones insisted that in hindsight, he would have continued with the Fahrenheit 451-like commission.

Indeed, just minutes after learning of the retaliation in Afghanistan, Jones shirked any semblance of responsibility, telling CBS: "In regard to the riots that have just taken place, the actions of breaking in, setting on fire, and killing at least 10 individuals so far is highly unacceptable for the government of the United States."

"I guess, you know, the freedom of speech — he had the right to do it; it's within the rights of our Constitution," he said. "He didn't do anything illegal, he didn't do anything incorrect as far as political issues go, but I felt that it was unnecessary and brought a really bad representation of the Christian church. I mean, I don't think Christ ever burned a book."

Baldwin said he was particularly touched by those of the Islam faith during his LDS missionary service in Spain. Baldwin said Muslims would always greet missionaries with a smile, while touching their hand to their heart as they shook hands with the missionaries.

It was an experience that Baldwin said he cannot match with what he often sees on the television on a continual basis.

"I really can't connect my experience with those people in Spain, with the way that media are portraying the things that go on in the Middle East, and putting it under the stamp of Muslim," Baldwin said. "I don't think that's true. I think a lot of it is fabricated to get a certain response."

Ryan Toth, a Christian and member of the Fellowship of Christian University Students (FOCUS), said he believes the university ranks well when it comes to prejudice against another faith, as evidenced by his own recent experiences.

"I think that, in general, there is less fear here than in other demographics," said the religious studies major. "I am going to the Middle East this summer and I have had more negative reactions from adults than from any student here."

While half of the students interviewed said they blamed the media first for its framing of the religion, Toth had a different culprit in mind.

"I think that any negative view of Islam is, in part, influenced by the government," he said. "We are at war with an Islamic nation and, unfortunately, we, as a country, need Muslims to be our enemies."

On home soil, such tension, Toth said, comes from the side which he aligns with theologically.

"It seems that in America there is more prejudice from Christians against Muslims than vice versa," he said. "Honest education about the Islamic faith could help decrease this prejudice since most of the bigotry that I have seen comes from a misunderstanding of Islam.”

This is the first of a two-part story about the impact of a pastor who burned the Quran in protest of an Islamic scripture that he believed supports terrorism. Part two will be published Friday, April 29 [in The Utah Statesman]. 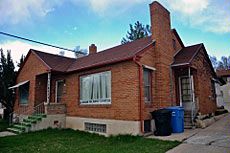 The Logan Islamic Center is the gathering place for locals of the Islam faith. USU students of the Islamic faith and those in other religions expressed their acceptance of the faith. (Ani Aghababyan photo from the Utah Statesman online)