The Student Life section of Utah State Today highlights work written by the talented student journalists at Utah State University. Each week, the editor selects a story that has been published in The Utah Statesman or the Hard News Café, or both, for inclusion in Utah State Today.
Stuff A Bus Collects Food for Cache Pantry
by Lis Stewart in The Utah Statesman
Volunteers for Associated Students of USU’s Stuff A Bus described the weather as chilly but hearts were warm as volunteers ventured on foot, with temperatures in the 20s, through Logan neighborhoods on the evening of Nov. 16. Volunteers went door-to-door asking for donations of nonperishable food items for the Cache Community Food Pantry.

Every Monday night during November, the volunteers collect food from residential areas of North Logan, Logan, River Heights and Providence. The collected food is needed by many Cache Valley residents. The pantry’s needs have increased by 40 percent this year, said Brittany Ingalls, Stuff A Bus chair on ASUSU’s Val R. Christensen Service Council.

The increase in need, Ingalls said, is largely because families that used to stay with the pantry for three to five months now require assistance for up to eight. The pantry serves about 140 families a week.

Other campus groups are helping reach the goal of 40,000 cans by holding their own fundraising events, such as requiring a can of food be donated in place of an entrance fee. Some groups schedule a night to volunteer to go around a part of Logan assigned to them. Ingalls said it is neat to see how many people are willing to help out. One of the goals for Stuff A Bus this year is to involve more groups from around campus than in the past.

Alden Erickson, Aggie Shuttle supervisor for the Department of Parking and Transportation Services, started the Stuff A Bus program about 10 years ago. He said he is impressed with the turnout from the student body.

Each Monday the Department of Parking and Transportation Services sends four Aggie Shuttles to Romney Stadium’s parking lot on 800 East. Additional bus drivers remain on call, Ingalls said, in case more people show up than the event organizers planned for.

“I might say, ‘We need more of the buses than you’ve given us.’ (Erickson) just makes it happen,” Ingalls said. “He is really good to work with.”

Large groups of USU students, sometimes as many as 200, volunteer each week. One shuttle driver said he holds the record for the most people on his bus, 113. When volunteers arrive, they are required to sign in with their name and A number and nonstudents sign in with their name, address and phone number. Once volunteers have been given instructions by Ingalls on how to introduce themselves as ASUSU representatives and being respectful to the homes they visit, they get on the buses and head to the neighborhoods.

Kristina Morrey, junior in communicative disorders, said, “We went to this one family, and they had these three little kids. You could tell that they didn’t have a lot of money, and they went into their kitchen and brought out like five bags of food. It’s amazing to me that people may have nothing at all and they are still willing to give.”

In addition to the Monday trips during Novomber, Stuff A Bus representatives will be on the Taggart Student Center Patio Nov. 23, with stations from the Cache Valley Radio Group to solicit donations of food, money and unwrapped toys. Volunteers will be handing out hot chocolate and candy canes, Ingalls said.

Black Friday, Nov. 27, will be the transition point for Stuff A Bus, Ingalls said. The Aggie Shuttles will be parked outside of ShopKo and the Wal-Mart in Providence to collect donations for Sub for Santa, a program that provides gifts for children and individuals in need. Last year, Sub for Santa provided 1,496 children in Cache County with presents, Ingalls said.

Erickson said Stuff A Bus has turned into one of the biggest private donors to Cache Community Food Pantry and Sub for Santa.

“(Cache County Sub for Santa) doesn’t just give (the children) one gift,” Erickson said. “They spend anywhere from $45 to $75 per child. It’s not just one present. They give them their whole Christmas. We obviously collect as much as we can, but we raised $10,000 last year for Sub for Santa. And our goal this year is $15,000.”

The volunteers with the shuttles will be out collecting donations all day Dec. 5 in front of Fresh Market — formerly Albertson’s — Macey’s, Sam’s Club, Shopko and both Wal-Mart locations, Ingalls said. As people go about their Christmas shopping, Ingalls asks that maybe they pick up another toy or donate their spare change to the Sub for Santa fund.

“There’s nothing sadder to see than a kid who goes a Christmas without presents,” Erickson said. 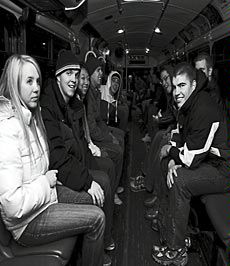 Volunteers pile into an Aggie Shuttle to collect cans of food for the Cache Valley Food Pantry. This volunteer effort is called Stuff A Bus and is hosted by the Associated Students of USU. (Photo from USU Statesman Online.)