Utah State University professor Greg Madden had no money to attend college and can attribute his success to his brothers.

“I am a first generation college student and my brothers blazed the way showing that working night jobs while succeeding in college was possible for someone like me,” said Madden.

Madden gave his Inaugural Lecture Series presentation Feb. 27, the 12th lecture of this academic year’s installment. His lecture, “A Series of Fortunate Events,” described his research and the events that led to full professorship.

The research then began to focus on nonhuman species, including rats, testing them to see how individual rats devalued future food consequences. Knowing which rats were impulsive and which were self-controlled, Madden arranged an experiment.

“We gave rats the opportunity to take cocaine by pressing a lever,” he said. “Most of the impulsive rats repeatedly pressed the lever, suggesting that disproportionate susceptibility to immediate consequences may underlie the decision to take drugs.”

With an understanding of the rats’ impulsiveness, Madden plans to evaluate its implications for human behavior.

In addition to his laboratory research at USU, Madden has collaborated with Heidi Wengreen in the Department of Nutrition, Dietetics and Food Science to investigate ways to encourage fruit and vegetable consumption among kids.

“The ultimate goal is to put together a package that schools would be willing to implement to positively impact their students’ health,” said Madden.

When not engaged in his research or teaching, Cache Valley allows Madden to ski and hike with his family and wife, Carrie Madden, while pursuing an academic career at a recognized research institution.

“What I love about USU is that there are world class researchers here but they are laid back and humble; it’s a great place to be,” said Madden. 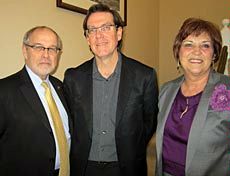 Greg Madden (center) has achieved the rank of full professors. He presented an Inaugural Professor Lecture Feb. 27 and was congratulated by USU Provost Raymond T. Coward and USU's First Lady Joyce Albrecht at the event.