The Student Life section of Utah State Today highlights work written by the talented student journalists at Utah State University. Each week, the editor selects a story that has been published in The Utah Statesman or the Hard News Café or both for inclusion in Utah State Today. Items are presented as they were originally published.

People are dying and disappearing every day in Syria, according to media reports.

Though the war may be on the other side of the world, the effects of it hit close to home for USU student Wafaa Arbash and assistant professor Abdulkafi Albirini, who are both from Syria.

Arbash, who is in the intensive language institute and plans to start her master’s degree in social work next year, said the war is something affecting everyone to some extent.

“When I was in Syria, I worked as a social developmental programmer as an active citizen,” Arbash said. “It teaches you how you can be a leader in your community.”

She said while traveling from town to town for work, she would have to get down “under the chair of the car” because of the combat going on outside.

Arbash’s family lost at least one member from this conflict.

“I have a cousin who disappeared,” Arbash said. “He was with the government and the rebels caught him, and we don’t know where he is now. He has two girls — two children. There’s a lot of persons missing from both of the groups, a lot of people who have disappeared totally from both sides.”

Albirini, who teaches Arabic at USU, said several members of his family have died in the war. He said there is a Facebook page his family has set up for those they have lost.

He said he gets his information from Syrian and Arab news sources available to him here in the U.S., and although his family remains relatively neutral in the conflict, he knows of more than 30 members of his extended family who have died because of it.

“Most of them are civilian,” Albirini said. “Some of them are children. I know that the regime possibly are not targeting them (civilians) in particular, but this is what we call collateral damage. The bomb or the missile does not discriminate.”

“You can be arrested for no reason,” Albirini said. “There are no free elections, no freedom of speech, no freedom of press. There are more security departments than universities.”

He said many surrounding countries fought to gain more freedom, and all those factors together contributed to the event that sparked the war.

In March 2011, 15 schoolboys painted an anti-government slogan on a wall and were arrested because of it.

“They are doing what they see on TV,” Albirini said. “It said, ‘The people want to topple the regime.’”

In the care of security personnel, one of whom was a cousin of Syrian president Bashar al-Assad, the boys were bloodied, beaten, burned and had their fingernails pulled out.

Albirini said these boys belonged to several large families in southern Syria, who then solicited for support from the government.

But, Albirini said, those peaceful demonstrations were met with gunfire from government forces.

“When people saw the amount of bloodshed and brutality, they demanded that al-Assad go,” Albirini said. “Mourners at funerals were fired on, so more and more fatalities.”

Arbash said intolerance and ignorance is another big factor in the conflict. She said many of those fighting do it because their group’s leaders tell them to, not because they have a personal interest in the politics behind it.

“They come and go without any thinking,” Arbash said. “When people start fighting each other, they don’t realize what they are doing. They don’t realize the effects-side of things. If they would just stop and think for one minute, we would be in (the) right situation.”

Albirini said he feels up to this point, the U.S. has been relatively passive and seems to have tried distancing themselves from the conflict, but more recently he’s seen them taking “some constructive steps” toward the conflict there.

“My personal view in the case of Syria (is that) the U.S. has a moral obligation to do something,” Albirini said. “If we say we are leaders in terms of promoting democracy and freedom — they (the people of Syria) are fighting for their freedom. They went out to fight for their rights as human beings.”

Others feel getting involved is a risky move. Steve Sharp, a political science professor, said he lived in Syria when al-Assad’s father, Hafez al-Assad, was in power. Hafez al-Assad served as president from 1971-2000. Sharp said there were also conflicts in that time, but they didn’t start with peaceful demonstrations like this one.

“It’s a hard problem,” Sharp said. “I would love to solve this problem and produce this peaceful, stable Syria. I would love for it to go back to fun-loving, family-oriented, not this intrinsically fanatical religious (place). But having that desire is not the same as having the solution to do that.”

Since Aug. 21, Syria has been under scrutiny for an alleged chemical weapons attack. United Nations inspectors recently reported they found clear evidence there was an attack using chemical weapons on civilians.

Opposition forces and the U.S. claim it was al-Assad’s forces who launched the weapons, while al-Assad said it could not have been his troops and opposition forces were behind the attacks, according to the Los Angeles Times.

Syria agreed to commit to the International Chemical Weapons Convention on Sept. 14, which bans the production, storage and use of chemical weapons.

“The U.S. believes there are 45 sites (of chemical weapons in Syria),” Ward said. “The Russians have agreed on that, and they’re supposed to do it by the middle of next year. But it takes a long time to do it.”

Albirini said he would also like to see more balanced coverage from the media. He said he feels they focus too much on the government fighting radicals and forget that it began with peaceful demonstrations.

Ward said many of those who want to live in peace are fleeing Syria and are trying to find refuge in neighboring countries.

“It’s creating problems in Lebanon,” Ward said. “I mean, there are 1.5 million Syrian refugees there, and it’s just overwhelmed. Jordan is the same way.”

A report last Friday from the U.N. News Center said more than 4,000 of the refugees are children without parents or adult relatives. Ward said one way students here could try and help is through humanitarian efforts for these people.

Still, Arbash said there are some positive things happening in her home country.

“There’s a lot of institutions and community involvement,” Arbash said. “There’s amazing things happening there that give me hope for the future. I think the community is the part that is going right, and it’s very important.” 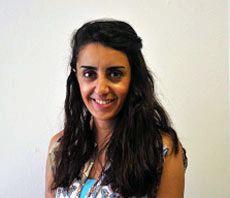 USU student Wafaa Arbash is part of the intensive language institute and plans to start her master's degree in social work next year. (photo from the USU Statesman Online)