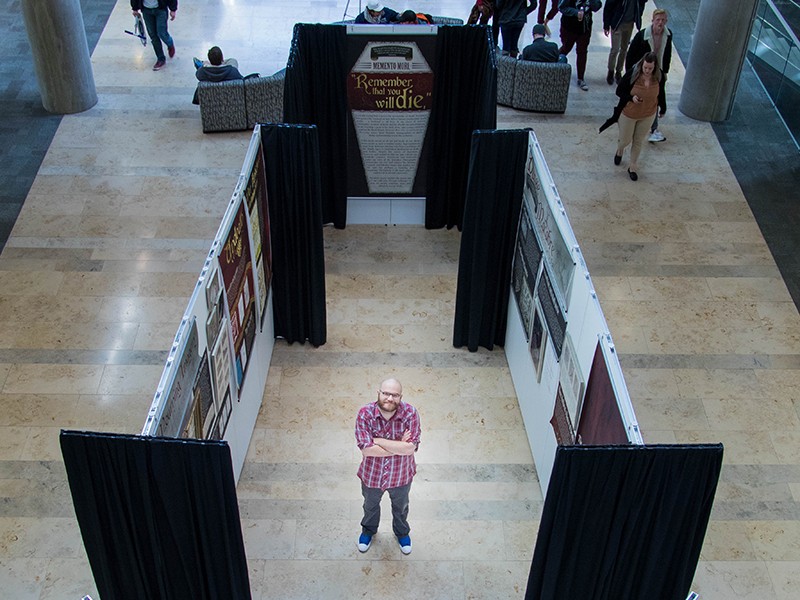 Curator Dylan Burns stands next to the USU Merrill-Cazier Library's exhibit, "Memento Mori: The Art of Death and Mourning" on display through December 10.

Like a walk through a crypt, a coffin-shaped exhibit chronicles the many facets of death and the human experience in the atrium of the Merrill-Cazier Library. The Utah State University Libraries display greets you with a chilling reminder that you must die, from the Latin Memento Mori. The somber expression sets the mood for a morbid walk through the darker side of the library’s collection.

The exhibit's focus is the central role that death plays in art and expression in “how we mourn, celebrate, deny and ultimately accept death,” said Dylan Burns, exhibit curator.

Along the way, you see medieval art depictions of danse macabre, or the dance of death, including a jolly jig by five skeletons depicted in Anton Koberger’s Liber Chronicarum, printed in 1493. And Hans Hobein’s woodcuts from the early 16th century using skeletal figures to sarcastically remind popes and emperors that, despite titles and thrones, all share a common fate.

You will also see an image from a treasured manuscript the library possesses, De Villiers Book of Hours. The image on display features three living and three dead kings who confront each other one day in the woods. The dead kings remind the living ones that, “as you are, I was, and as I am, you will be,” Burns says. “I had read about the story and I was surprised to have found it in our collection. It’s an important folk tale in Western history and so it’s really cool to have an example here that previously has not really been talked about.”

Same for the topic of death itself.

“Death is something that we should confront and accept,” he says. “We should be okay with discussing it out in the open. It’s natural and it happens. So I guess that’s what I was aiming for in this exhibit. It is something that people have talked about for a long time, and are going to keep talking about it – and so should we.”

And so it is that through this bare-bone look at death, you come to appreciate the imagery and symbols surrounding it. Skulls, for example, are reminders of both the limits to life and the seemingly everlasting impact that bones leave behind, Burn says. “Even trophies like Old Ephraim’s skull serve as a reminder that even the mightiest grizzly meets the same fate that we all share.”

And with it, a fascination that holds us today, grave as it may be. Like looking at old Compton Family Studio photographs of stoic family members in Brigham City posed with their deceased for one last family portrait. Or, sharing stories about a headstone of a weeping woman in the Logan City Cemetery that grow into urban legends. Stories trumpeted about a woman who lost all her children and died in grief, or of a mother gone mad who murdered all her children before taking her life. Common folk tales conjured up in cemeteries all across the country, Burns says.

And isn’t that what also makes Halloween so special?

“These moments when we’re able to confront these kinds of things and sort of go to that edge and then always safely go back,” Burns says. “That’s what kids who go out to the weeping woman are doing. They’re going to the edge of the spooky supernatural world, and then they come back. It’s a way to experience these kinds of things.”

These kinds of human expressions, humorous or horrific, that all point to how we deal, through art and words, with death and the fear that often accompanies it. But why fear it, Epicurus asks. “If I am, death is not. If death is, I am not. Why should I fear that which can only exist when I do not?”

The event is going on now through December 10. Take a digital tour of the exhibit here: http://exhibits.usu.edu/exhibits/show/mementomori