The development of third generation, non-food source biofuels holds many challenges and much promise from the perspectives of research and the military. Attendees at a June 2009 Lunch with Leo science lecture in Salt Lake City heard from a Utah State University expert and an Air Force colonel on the progress and potential of using algae-based biofuel.

This immediate need doesn’t just affect the fuel consumer paying at the pump. The United States government’s need for alternative fuel is even greater.

The U. S. military spends $6 billion on three billion gallons fuel each year. When fuel costs reached record dollar amounts in 2008, the rise in the cost of fuel became more than an economic problem; it became a national security issue as well.

To counter this risk, the Strategic Technology Office of the Defense Advanced Research Projects Agency (DARPA) has contracted with defense contractor General Atomics to develop and test an algae-based jet fuel that is comparable to military jet fuel, or JP-8. As a sub-contractor, the USU Energy Lab is projected to see a $4.5 million share of that General Atomics contract.

Colonel Jack Kelley of Hill Air Force Base also spoke at the event and delineated the goals:

* By 2016 half of the fuel used domestically in Air Force planes will be a 50/50 biofuel/conventional fuel mix.

* Competitive biofuels must be identical to petroleum-based fuel by weight, volume and make up.

* Synthetics must burn exactly the same as conventional petroleum fuels and engines running petroleum must be able to seamlessly switch to the biofuel blend, and back, without so much as a hiccup, let alone a “flame out at 35,000 feet,” Kelley said.

“It’s a question of national security and a seamless transition to new technology,” said Col. Kelley. “The synthetic fuel needs to meet or exceed what we have now.”

Currently algae-based jet fuel isn’t developed enough for extensive military testing and so the Air Force is running tests on coal-based synthetic fuels. These rounds of tests will be repeated on algae-based biofuel comparable to JP-8 in the near future. Col. Kelley is optimistic.

So far test flights involving synthetic fuel have been successful and there is no reason to believe that the algae-based jet fuel, which shares major characteristics with synthetic fuels, will be any different. One point of difference? Coal-based synthetic fuels do not meet carbon emission standards for long-term or exclusive use by the U.S. military. But the algae biofuel that Muhs’ team is developing is likely to do so, for pure biological reasons. Algae capture carbon dioxide rapidly and are the most productive of all photosynthetic life on earth.

There is much to be optimistic about algae and Muhs recently testified in front of the U.S. Congress urging for a greater federal research investment in development of mass-scale technology to create algae biofuels.

The future of fuel, according to Muhs, is complex. Despite the complexity of the equation, Utah has within its borders access to a wealth of energy resources: wind, solar, uranium, oil shale, tar sands and third generation biomass.

“Regardless of the fuel, Utah is at the crossroads of America’s energy future,” said Muhs.
Lunch with Leo is a series of quarterly lunchtime discussions about current science and technology topics and their impact on society and is sponsored by The Leonardo, a museum that fuses science, technology and art to inspire creativity and innovation. 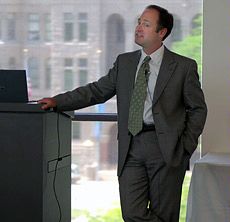