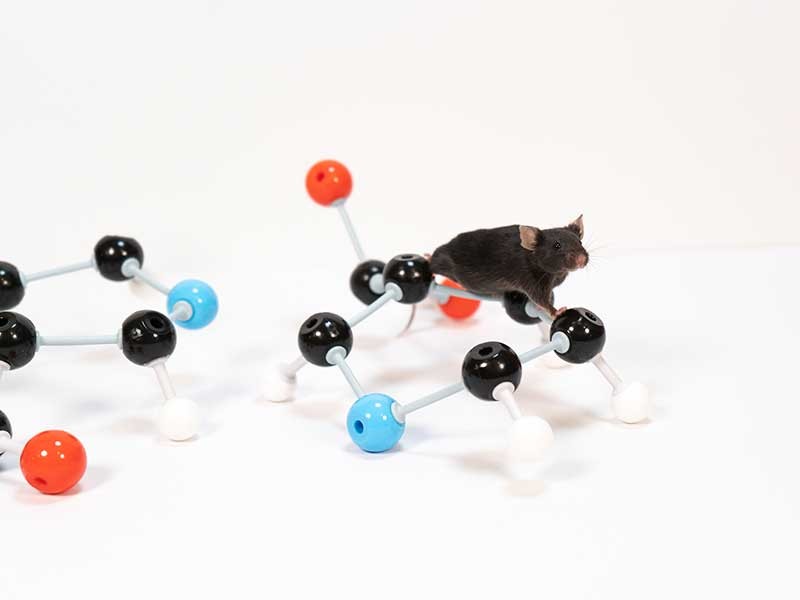 Despite the best efforts of cartoonists, mice are not little humans. In one particular way mice are superior to us because they can get the niacin they need in two ways. One is through food, like humans do, and the other is through the amino acid tryptophan, making it almost impossible for mice to become niacin deficient. There are various theories about why humans can’t do this, but most the prevalent one is that the tryptophan pathway creates a neurotoxin. This doesn’t cause much harm in a mouse that only lives two years, but it would be toxic to humans over a lifetime.

Meet ANDY. The acronym stands for Acquired Niacin DependencY and names a transgenic line of mice that metabolize niacin only through food, just like humans. The transgenic ANDY line was created by Mirella Meyer-Ficca, Utah State University research assistant professor of animal science and her colleagues at the University of Pennsylvania. The new transgenic mice allow niacin studies to be done in mammals that more closely resemble human physiology and metabolism. Before ANDY, researchers used either yeast or worms for their models or used regular mice and hoped for the best. The research also involved other USU faculty members and student researchers, as well as scientists with the USDA and University of Guelph.
Development of the new mouse model was described in an article recently published in the journal Cell Reports.

Niacin, also referred to as vitamin B3, was first under scrutiny in the early 1900s when low levels of the vitamin were directly linked to pellagra. The condition manifests itself as painful skin lesions, diarrhea, hair loss, weakness and dementia. Left untreated, pellagra is fatal.  Niacin is plentiful in red meat, poultry and fish but is less available in vegetables. Outbreaks of pellagra were common among people in the southern United States and in countries that relied on corn as the major food source. In the early 1940s, U.S. flour mills were encouraged to fortify their flour with niacin and “enriched” flour soon became standard throughout the country.

According to Meyer-Ficca, fortified flour has made pellagra rare, but niacin metabolism remains something of a mystery in human health. It is related to Alzheimer’s, obesity, aging, cancer therapy, pregnancy, alcoholism and metabolic syndrome.

The most important compound resulting from niacin in metabolism is NAD (nicotinamide adenine dinucleotide) also described as NAD+ and NADH though there are subtle differences, Meyer-Ficca says. If you look around the internet or any supplement store you will see dozens of NAD and NAD+ concoctions claiming to prolong life, improve cognitive health and ward off Alzheimer’s disease.

If you are pregnant or an alcoholic, your NAD levels go down, she explained. The levels also go down during chemotherapy, which means your NAD is being used more. Low levels of NAD are also associated with Parkinson’s and Alzheimer’s diseases. We also know that NAD is essential to metabolism and DNA repair, so it is not surprising that it is sold as an anti-aging supplement.
This makes the ANDY line of mice especially useful, Meyer-Ficca says. Since mice only have an average lifespan of two years, it is easier to do longevity studies. The scientists are also studying how niacin effects the sperm of the ANDY male mice and, thus, the offspring of these mice. Whether they are niacin-deficient and thin or NAD-rich and fat can determine how their offspring metabolize glucose. These differences are based on what the mouse fathers eat and their age. This research is applicable in human males and the traits they may pass on to their children depending on their age at procreation.

The journal article is available at https://tinyurl.com/NiacinMice.