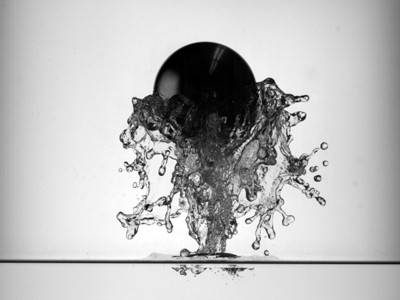 It’s a common swimming pool game: Force a buoyant ball underwater and let it go. The ball springs to the surface and jumps into the air. But, submerge the ball deeper underwater and the effect is often disappointing. Contrary to our intuition, increasing the release depth often leads to a decreased pop-up height.

This simple fluid dynamics question has puzzled physicists for decades, but a new study published Nov. 1 in Physical Review Fluids, offers new perspective into the phenomenon and may clarify topics related to water exit dynamics and ocean engineering.

A team of researchers from Utah State University, Dartmouth College and Brigham Young University used high-speed imaging and particle image velocimetry to describe why buoyant spheres ascending through a fluid don’t always behave the way we expect them to.

“The pop-up height depends on the speed of the sphere at the point it breaches the free surface,” said lead investigator and assistant professor of mechanical engineering at USU Tadd Truscott. “It doesn’t matter how deep the ball is when it’s released. There are a number of factors that affect its speed and trajectory until it reaches the surface.”

During ascent, wake and vortex structures often form around the sphere. Asymmetric vortex shedding and wake formations can alter a sphere’s upward movement and result in a non-linear trajectory. The authors demonstrate that rising spheres usually fall under one of two acceleration categories: 1) a vertical regime, or 2) an oscillatory regime.

“The vertical regime exhibits a nearly vertical underwater trajectory and results in the largest pop-up heights,” explains Brenden Epps, assistant professor of engineering at Dartmouth and co-author on the study. “The oscillatory regime exhibits a trajectory with periodic lateral motions and results in lower pop-up heights. Sometimes the ball may even breach the surface and skim across it rather than rising into the air.”

To test rising sphere behavior, researchers submerged stainless steel balls into a test tank at various depths and held them in place using a suction cup connected to a vacuum release mechanism. After sufficient wait time to allow the water to become quiescent, the suction cup released the sphere while four synchronized high-speed cameras recorded its ascent.

But the conversation doesn’t end there. Part of the pop-up height problem also depends on what happens to the sphere at the point of surface breach.

The authors say their study has a broad range of applications. A better understanding of water exit dynamics, they explain, can be useful in maritime engineering and marine biology.

“Penguins exit the water after a hunt or to avoid predators,” they write. “It has been hypothesized that emperor penguins use bubbles released from their feathers during ascent in order to reduce drag and increase exit velocity and pop-up height. … Other important applications of the pop-up effect include underwater vehicle exit, floating sea structures and wave-energy converters.” 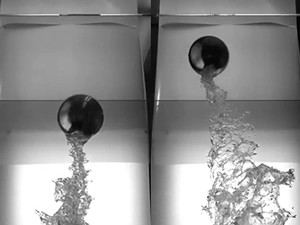 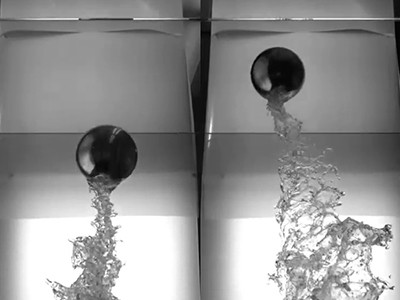