The Price is right.

At least that’s what people at the Jon M. Huntsman School of Business would say of Jay Price, a professor who hasn’t picked up a paycheck since he started teaching here 20 years ago. But don’t joke with his students about him being a “good for nothing” professor because, to hear them describe it, Jay Price is priceless. They say that because he was such a good teacher, example and mentor, they will never forget him.

Price worked in the Chicago office of Arthur Andersen for 39 years and was a partner when he reached mandatory retirement age of 62 in 1988. If the firm thought Price was ready to kick back and relax at 62, it was wrong. Price said other partners he knew went off to Florida to retire and play golf, but Price didn’t play golf.

“All my life I’ve always been a person who likes to keep busy,” he said. “I’ve never been very good at recreational activities.”

Before Price retired, Utah Power/PacificCorp had been one of his clients. Orrin Colby, who was, at the time, the controller for Utah Power, suggested he consider teaching at USU. That appealed to Price because he had once thought about going into teaching. He paid a visit to the USU campus met with Larzette Hale, head of the School of Accountancy, Dean David Stephens and several other faculty members. He was very impressed with the quality of the faculty and the program and decided to teach for a couple of years.

Price seems a little puzzled when pushed to explain why he has volunteered his time for 20 years.

An “adequate job” is an understatement, according to his students and those he has worked with.

He was named accounting teacher of the year three times. He received the School of Accountancy Outstanding Service Award in 2001and was honored with the USU Founders Day Distinguished Service Award that same year. He was named the Distinguished Accounting Alumnus at the University of Wisconsin in 1998. He got an honorary doctorate from USU in 1993.

Richard Jenson, the head of the School of Accountancy, said that it would be difficult to measure the many benefits that have come from having Price as a faculty member.

“What an amazing gift Jay has been to our students,” he said. “When you take the experience and expertise Jay has and combine that with the way he cares about our students, we all benefit immensely from his contributions.”

Jenson said that Price was once in the hospital for a few days and that he went to visit him. Price was being given a unit of blood.

“I noticed that spread out on the bedside table was one of the exams for the intermediate accounting class,” Jenson said. “It impressed me that he did not want to let his students down. On the schedule it showed that there was an exam, and he wanted to make sure that it took place. He didn’t want to impose on another faculty member to make up that exam. He wanted to do it himself.”

Price has contributed more than his time. He helped establish the Arthur Andersen Alumni Professorship in accounting and funded the largest scholarship endowment in the School of Accountancy, the Jay H. Price Scholarship. He has also funded scholarships at the University of Wisconsin. Students receiving scholarships are required to commit to giving back to their university after graduation.

The importance of volunteering your time and contributing to a worthy cause is something that Price said he teaches his students.

“The chances are that you are going to be asked to serve on not-for-profit boards,” he tells them. “Many employers encourage that, and it’s a fine thing to do anyway.”

Once drafted to serve on such boards, the first thing that will happen to an accountant is that he or she will be asked to be the treasurer. Price has been a volunteer overseer of finances at St. Peter’s church in Chicago since 1959 and now serves on the Board of Trustees of a small college in Chicago.
Price thinks that accountants should be willing to share their understanding of important financial issues that are often in the news, but misunderstood.

Price said he doesn’t have any plans to retire from the School of Accountancy unless he eventually has to do so for health reasons. 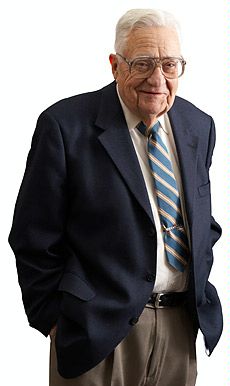 USU accounting professor Jay Price hasn't picked up a paycheck since he started teaching at USU 20 years ago. The University of Wisconsin alum has been volunteering at USU since he retired from the Chicago office of Arthur Andersen in 1988.