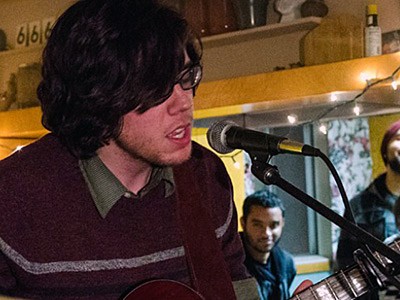 (photo from The Statesman Online)

By Alyssa Hawkins in The Utah Statesman January 13, 2015

“Because this club was dormant all of last year, we’re really building from the ground up,” said Benton Wood, president of the IMC.

Wood, an undeclared freshman at USU, was a fan of the IMC as a high school student, and attended many of their house shows.

“Music has been a great outlet for me personally, and many people have inspired me to (make music),” Wood said. “This includes the IMC in their earlier days when I was still in high school coming to the shows. I felt that it needed to be paid forward.”

The club, which is made up of just a few members, works towards reaching out to other USU students interested in music.

“The IMC’s mission statement is to ‘promote, inspire and create,'” Wood said. “The focus is to shed light on musicians who aren’t in traditional programs offered through USU. We want to build a community of artists who play, share, write and perform music around Logan and USU campus. We want people who’ve been ‘closet’ performers to hit us up for a show and perform their material. Everyone’s got a good song in them, and we’re hoping to provide all of the necessary components so that it can be heard.”

Aside from his responsibilities as club president, Wood is also involved with several other projects, including being in the band little Barefoot, as well as more recent work in Panthermilk.

Taylor Ross Wilson, a member of little Barefoot, has also taken on the role of vice president for the IMC after a short time of involvement with the club.

“I didn’t get involved as an actual member of the club until this last fall semester when the club was basically resurrected, and Benton Wood became the president,” Wilson said. “Me and Benton have been friends and bandmates for a while, so it was natural that we both work on the club together.”

Wilson, a junior majoring in elementary education at USU, has been a part of little Barefoot for almost three years. Along with writing every song, Wilson provides guitar and vocals for many of their songs.

“Little Barefoot is basically the main outlet for my creativity, music and performances,” Wilson said. “Currently, I’ve been mainly focusing on recording a new album, but I’ve still been occasionally playing concerts as well.”

Katie Egbert, a sophomore majoring in psychology at USU, said she remembers a performance last year by little Barefoot. She liked that the band was personal with its audience.

“I would definitely go again if I knew that little Barefoot would be performing,” Egbert said.

The IMC has a full event calendar for the spring semester set to feature local artists, such as little Barefoot and others. Both Wilson and Wood are excited about the upcoming plans for the club.

“Mostly right now, we’ve been putting on the house concerts around Logan, having various out-of-town bands as well as locals perform,” Wilson said. “In the future, we’re looking to do some cover concerts, as well as some seminars. Basically to build the local music scene and get as many people as possible attending shows and being involved.”

IMC house shows generate a lot of attention. On Jan. 9, the club’s Mellow Indie Night, had close to 70 people in attendance.

“All the acts are very different from one another,” Wilson said. “We have a touring act from Boise as well as another touring act from Portland/Arizona. Also two locals — little Barefoot and Svelt.”

Wood also has plans to help get other artists involved with the IMC. Through workshops and other scheduled events, the IMC will gather in more talented local artists, he said.

“We’ll also be doing events this semester such as a songwriting workshop, guitar maintenance workshop and possibly a build-a-band workshop,” Wood said. “We’ll be teaming up with Fast Forward Charter High School and hopefully other local high schools to help musicians there channel their playing somehow. It should be noted that, with little exceptions, all musicians are encouraged and welcomed to book shows through us. They will typically be free, and we’ll work to help get you heard.”

Members of the IMC hope to cultivate a lasting impact with others in the community by spreading the word and getting other local artists involved.

“If we can inspire one person to play a show or have one listener be moved by someone’s music, that’s what it’s all about,” Wood said.