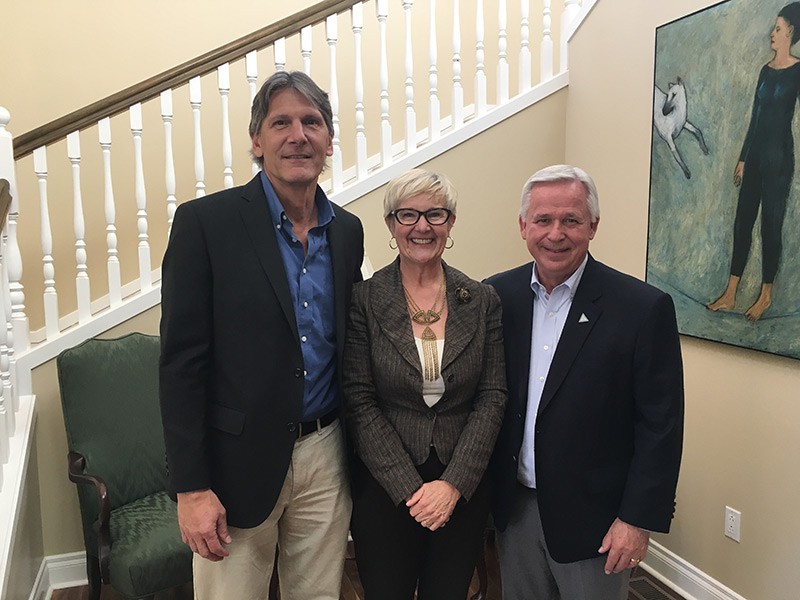 Adrianne Moore, head of the Department of Theatre Arts in the Caine College of the Arts, gave an inaugural lecture entitled “Theatre: In Collaboration” where she was honored for promotion to full professor. The lecture was held Oct. 12, 2017 at the home of USU president Noelle Cockett.

Originally from New Zealand, Moore has also lived in Australia, Papua New Guinea and England before moving to the United States 24 years ago. She completed her undergraduate degree at the University of Auckland (New Zealand) and moved to the UK to pursue a diploma in directing with the British Theatre Association. Moore directed plays on the London Fringe working with talented actors while also teaching voice and acting at the Italia Conti Academy of Dramatic Art in London.

Returning to New Zealand for the birth of her first child, Adrianne managed to slide in a few productions and some teaching before leaving for the United States. She completed an master’s in fine arts in directing at Florida State University (FSU) under the guidance of Fred Chappell. Although her MFA is in directing, her time at FSU and the strong vocal training available there, reawakened her passion for the voice and accent work she studied as an undergraduate.

Moore moved west to join the faculty at USU and the Utah theater community. She has continued pursuing both theatrical passions—teaching directing and voice at the university and maintaining a freelance career as a director and dialect coach. Productions she has directed at USU include Time Stands Still, Reasons to be Pretty, Candida, Our Country’s Good and King Lear.

Professionally, Moore has enjoyed fruitful relationships with several theater companies as both a director and dialect coach, including the Lyric Rep, Salt Lake Acting Company, Pioneer Theatre Company and the Utah Shakespeare Festival. Along with her department head position, she is also the artistic producer of the Lyric Rep.