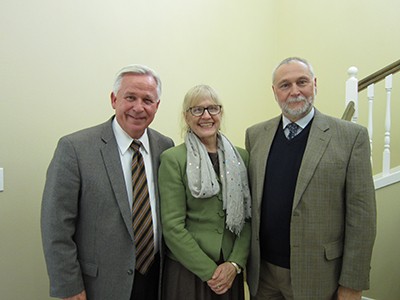 Nancy Hills, professor in the Department of Theatre Arts in the Caine College of the Arts at Utah State University, gave an inaugural lecture entitled “The Storytelling of Art of Costume Design,” where she was honored for promotion to full professor. The lecture was held Oct. 25, 2016.

Born in a Studebaker in San Mateo, California, Hills has worked in theaters all over the United States. Her favorite designs since joining the faculty at USU include Les Liaisons Dangereuses, Good Night Desdemona, Good Morning Juliet, Pride and Prejudice, Cabaret, To Kill a Mockingbird, A Little Night Music, The Miser, Enchanted April and Jacques Brel is Alive and Well and Living in Paris. Her designs for The Miser were displayed at the International Prague Quadrennial held in the Czech Republic in 1999, along with her collaborative work with Bruce Duerden and Dennis Hassan on Les Liaisons Dangereuses in 2003.

Hill’s designs at the Artist Repertory Theatre in Portland include Next to Normal, And So It Goes, The Playboy of the Western World and Blithe Spirit. In February 2016 she designed the premiere of Streetlight Woodpecker by Shawn Fisher at the Salt Lake Acting Company. In 2013 she received the Janet Arnold Award from the Society of Antiquaries in London that funded developing patterns taken from two U.K. historic clothing collections. White versions of the garments have been shown in several exhibits in England. Nancy gave a TEDx talk on the impact World War II had on clothing called Make Do and Mend. She is the mother of twin sons Douglas and Tristan.