Six student members of Utah State University’s Get Away Special ‘GAS’ space research team learned what it’s like to be astronauts as they floated in mid-air and enjoyed the excitement of microgravity flight.

“Being weightless was even more incredible than I expected,” says Eric Torres, a mechanical engineering major from Menan, Ida. “Suddenly, there was no ‘up’ or ‘down.’ That sense of direction doesn’t exist in microgravity.”

But the trip wasn’t without a few glitches. Upon their arrival at the Texas Gulf Coast, the students discovered their previously shipped experiment was not waiting for them at NASA’s famed Hangar 990 as planned.

“We ended up renting a truck and driving through Houston’s rush hour traffic to retrieve our experiment,” says Martineau, the team’s project leader and a veteran microgravity flyer from USU’s 2011 trip to Microgravity University. “It was a bit stressful because we lost a day of testing. Our experiment was ready to go when it left Utah, but you never know what’s going to happen to sensitive wires, electronics and other parts during shipping.”

FUNBOE 2.5, short for “Follow-Up Nucleate Boiling On-Flight Experiment 2.5,” builds on the team’s 2010 and 2011 experiments as well as a previous GAS team experiment that flew on Space Shuttle Endeavour in 2001. The FUNBOE experiments examine fundamental questions about boiling water and other liquids in space. FUNBOE 2.5, which performed flawlessly in microgravity, collected data to test a novel idea of cooling using boiling heat transfer on a micro-fabricated silicon chip.

“The ability to control bubble generation and use boiling as a mechanism of heat transfer could have multiple applications,” Martineau says. “This includes thermal management solutions critical for long-term space travel to Mars and beyond.”

Aboard the microgravity jet, the Aggies experienced weightlessness as the specially modified Boeing 727, following a parabolic path, repeatedly climbed and dived from 32,000 feet in a series of about 32 controlled free falls above the Gulf of Mexico.

The current jet is known as “G-Force 1;” its predecessor, a Boeing KC-135 used to film space scenes in the movie Apollo 13, was known by the infamous moniker “Vomit Comet.”

“It was really fun and, during our flight, we got to see a NASA team practicing CPR in microgravity,” says Kullberg, a mathematics major from Vancouver, Wash. “After about 18 parabolas, though, I started to feel a little queasy.”

Back in Utah, Kullberg is carefully sorting through the collected data and matching it to video of the experiment operating in microgravity.

“In terms of analyzing our data, we’ve barely scratched the surface,” he says. “There’s plenty here to keep us and future undergrads busy with research projects.”

Expect to see those projects at upcoming undergraduate research events, Martineau says. He adds the team will soon decide whether to submit a proposal for NASA’s 2013 Microgravity University.

“To comply with NASA requirements, our next experiment will need to be a completely new project,” he says. “That’s a big job and a big time and financial commitment, so it will be up to the GAS Team to decide.”

Other members of USU’s GAS Team are currently working on a cubesat (cube satellite) project the team hopes to launch on a space agency or commercial rocket within the next few years.

FUNBOE 2.5 was flown in memory of former GAS team member Rob Barnett, who served as the team’s ground crew member at NASA’s Microgravity University in 2010 and 2011, and was instrumental in developing and building the experiment. Barnett, who graduated from USU with a bachelor’s degree in electrical engineering in May 2011, passed away December 30, 2011, in Salt Lake City.

This year’s experiment carried a photo of Barnett and, in a tongue-in-check tribute to their friend, NASA allowed the students to carry a burrito — Barnett’s typical meal choice — on the microgravity flight.

“I’d like to say thanks to Rob Barnett for playing a critical role in this experiment,” Torres says. “As we watched the burrito floating in microgravity, it reminded me of what’s important in life — to enjoy it, have fun and live it to its fullest.” 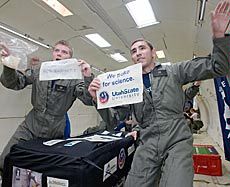 USU students Jon Thorne, left, and Eric Torres float in microgravity aboard a NASA-contracted jet as they conduct an experiment. Thorne holds a half-eaten burrito as a tribute to the late Rob Barnett'11, a former teammate. Courtesy NASA. 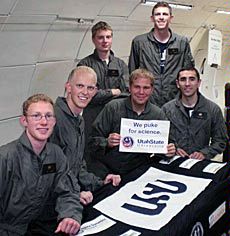