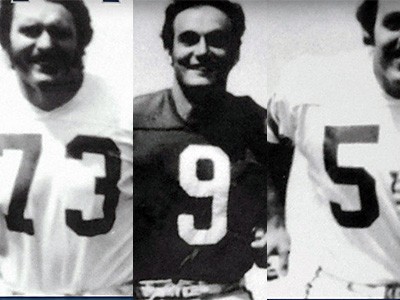 Former Aggies Joe Forzani (73), Tom Forzani (9) and John Forzani (54) are being inducted into the Alberta Sports Hall of Fame on Friday, June 3, 2016. (photo collage from the Athletics website)

Three former Utah State football players, the Forzani brothers, will all be inducted into the Alberta Sports Hall of Fame Friday, June 3, as part of the 2016 class.

In addition to Joe, John and Tom Forzani, the 2016 class includes Basil Bark, a longtime friend and business partner of the brothers. The official induction ceremony takes place at the Sheraton Red Deer, central Alberta’s premier hotel and convention center.

The Forzani brothers and Bark will receive the Achievement Award.

“It’s always an honor to be inducted into anything usually, as long as it isn’t jail,” joked Tom Forzani, who then took on a more serious tone. “It’s definitely an honor, but unfortunately my brother, John, won’t be there. He’ll be remembered, though. In one respect it’s great, but it’s also a heartfelt sorrow that he can’t be around to be a part of it.”

“My brother John was one-of-a-kind,” Joe Forzani said. “It’s too bad he passed away because he is really missed.”

“It’s a hell of an honor,” Joe Forzani said. “My brothers and I all came from very poor Italians that emigrated from Italy to Canada way back in the early 1930s. We were raised in a poor neighborhood where Italy was not a very good word growing up. Coming from that environment and working ourselves through high school and then on to Utah State and the pros, it’s a sense of accomplishment that our athletic goals have been accomplished and people have recognized our great sportsmanship and our great athletic endeavors, so it’s a really good feeling.”

Joe was the first of the Forzani brothers to play football for the Aggies. He played his first two seasons (1965-66) under Tony Knap and his final year (1967) under Chuck Mills. The three-year letterwinner helped Utah State amass a 19-10-1 overall record, including going a perfect 3-0 against Utah.

“They were both excellent coaches, but different in styles,” Joe Forzani said. “Tony was really hard-nosed and he instilled a lot of discipline, whereas Chuck Mills created a lot of healthy concepts and creativity in the way we did things.

“I played with some great athletes, too. I played with Roy Shivers, Bill Staley, MacArthur Lane and Sid Lane, guys who went on to the pros and played many years. They were very gifted and that was a motivating factor, too, to be able to play alongside some of these guys and watch them get drafted in the early rounds and then go on to have successful pro careers.”

Joe Forzani also went on to have a very successful professional career, playing in the Canadian Football League for the Calgary Stampeders for nearly 10 years. John and Tom would later join him in Calgary and the trio played together for three years. Joe helped the Stampeders win the 1971 Grey Cup.

“It’s a very, very, very difficult thing to do what we did, but we all had the same goals and the same desires, and we obviously had the athletic ability to carry that through,” Joe Forzani said. “It was really special to me to play three years with your brothers, it really was.”

John Forzani was a three-year letterman and tri-captain for Utah State at left guard from 1968-70. He graduated with degrees in business and physical education. Following his collegiate career, John returned to his hometown of Calgary, Alberta, and joined Joe with the Stampeders, where he played left guard for six seasons from 1971-77.

John Forzani was a very successful businessman and started the Forzani Group, building a chain of sporting goods stores into a national success. By the time Canadian Tire purchased the Forzani Group in 2011, the empire had reached 600 stores and a whopping 40,000 employees.

“John was a very visionary and smart guy on that end,” Joe Forzani said.

Added Tom Forzani: “John was the major banker of that one by far. Joe and I, along with Basil, all invested money in it and it was a good investment.”

John Forzani was also part of a group of investors that bought the Stampeders in 2005. When the Calgary Flames of the NHL became majority owners in 2012, Forzani retained a minority interest and was the team’s co-chair until 2013.

Tom Forzani was the last of the brothers to don the navy blue and white of the Aggies. He played wide receiver from 1970-72 and earned honorable mention All-America honors from The Associated Press as a senior after leading the nation with 85 receptions, to go along with 1,169 yards receiving and eight touchdowns.

“Joe chose Utah State with coach Tony Knap,” Tom Forzani said. “John was a big guy and he also played football in high school up here in Calgary and was a standout. He went down to Utah State on a recruiting trip and they liked what they saw and got John to go there. I was actually going to play basketball, but Chuck Mills, who was the football coach then, said to my mother, ‘I owe you one and I’m going to give your son a football scholarship,’ and that’s how I got there.”

During his senior season, Tom Forzani caught a school-record 15 passes for a then-school-best 193 yards in a 51-7 drubbing of Idaho. Following his senior season, he played in both the Blue-Gray All-Star Game and Senior Bowl, and was named the Outstanding Back of the Blue-Gray Game. Tom ended his Utah State career as the school record-holder in both receptions (132) and receiving yards (1,806), numbers that have since been broken.

“It was unbelievable what he did,” Joe Forzani said. “He would never admit that and he would never think that was a big deal. Sometimes going through things, you don’t think it’s big, but when you really look back on it, you can’t help but say, ‘I’m glad I accomplished that.’”

Tom Forzani helped Utah State to a 22-10 overall record, capturing the Beehive Boot (the state’s collegiate football championship trophy) in both 1971 and 1972 as the Aggies posted wins against BYU and Utah in both seasons.

“If somebody said, ‘Beam me up, Scotty,’ to a part of my life, I would choose a couple of years at Utah State, my junior and senior years,” Tom Forzani said. “They were fantastic, fun, happy years. I was 20 years old, which also helps, but I enjoyed every second of it. Of course you don’t enjoy it when you’re there, but when you’re as old as me and you reflect back on it, you appreciate how much fun you had, the people you met and the great time it was.”

Following his stellar collegiate career, Tom Forzani played professionally for the Stampeders from 1972-83 and was a five-time CFL All-Star. He finished his CFL career ranking second all-time in Calgary history in receptions (553), receiving yards (8,825) and receiving touchdowns (62).

Tom Forzani was named to Utah State’s All-Century Football Team in 1993 and will be inducted into the USU Athletics Hall of Fame in September.

“I’m really proud of him and it’s really fantastic that at least one of us got into the Utah State Hall of Fame,” Joe Forzani said. “We played with a lot of great players and there are a lot of good people in there, so I think it’s very representative.”