Three Utah State University faculty members participated recently in the Inaugural Professor Lecture Series, a program coordinated by the provost’s office and hosted by President Stan Albrecht and First Lady Joyce Albrecht. Speakers in the series are recently promoted full professors who present a lecture that highlights their research, creative activity or teaching career at the university.

Holmgren serves as the Agriculture/4-H Youth Agent in Box Elder County. Approximately half of his time is spent working with livestock and crop producers where his focus is on futures and hedging, price discovery, options on futures contracts, strategies and farm and ranch management.

The other half of his assignment is working with the 4-H program, primarily on livestock and poultry project areas and leader development. Holmgren developed a record-keeping computer program for livestock and horse shows and a variety of websites for agriculture and youths. He and his wife, Kathy, live in Tremonton and have five children and six grandchildren.

Sandra Laing Gillam, a professor in the Department of Communicative Disorders and Deaf Education, presented a program titled “A New Beginning.

Gillam received her bachelor’s and master’s degrees from Auburn University. In her last year at Auburn, she was appointed as a speech language pathology trainee to the Veteran’s Administration Hospital in Tuskegee, Ala., where she worked with veterans with communication disorders for over a year. Upon graduating, she began her career as a school-based speech language pathologist working with preschool, elementary, middle and high school students with speech and language disorders.

At one point, Gillam co-created an “equal opportunity” Drill Team with the school counselor at a low-income campus to teach children about the dangers of drugs. This Drill Team toured the school district performing skits and dances.

She moved to Casper, Wyo., and was one of two speech-language pathologists in the city with a master’s degree. Because a master’s is required to work outside the school-system, she was on call for practically every organization in the city and rarely said “no” when asked to see patients who needed help. As a result she worked in early intervention, home health, rehabilitation and in private practice serving a range of patients, including children with terminal illnesses.

After working in the field of speech language pathology for 10 years, she returned to school at the University of Memphis and completed her doctorate under the direction of Alan Kamhi, specializing in the areas of language, literacy, special education, reading and multicultural issues.

She moved to Logan in 2006. Her career at USU has been a whirlwind experience of working with students, in particular undergraduate students, and making state, regional, national and international presentations and collaborations. She has served as a visiting professor to Curtin University, Perth Australia, is the advisor from Utah to the American Speech Language Hearing Association and is now the principal investigator on a large grant funded by the Institute for Education Sciences in the U.S. Department of Education.

Her experiences working with children with terminal illnesses and her mother Jo’s previous work in helping to establish the first “hospice” organization in Alabama led her to volunteer and eventually serve as a board member for the Intermountain Health Organization hospice in Logan.

Gillam is married to Ron Gillam, the Raymond and Eloise Lillywhite Endowed Chair in the Department of Communication Disorders and Deaf Education. They are inseparable both personally and professionally. They have three daughters and one son.

Robert Parson, the University Archivist in Special Collections and Archives in the Merrill-Cazier Library, presented a talk titled “I Need that Black Book I Used Last Summer.”

Parson grew up in the community of Benson, northwest of Logan, in the home of his great grandmother where he still lives with his wife, Shari. He is the father of two sons, who became the fourth generation to grow up on the family farm.

The position of Archivist, where he devotes his time to studying and providing information about USU and its locality, is the perfect career for Parson. He admits to having little interest outside Cache Valley, and even considers a drive to Salt Lake City to be a major road trip — not that he has not logged considerable road miles.

Much of his early adult life was spent performing blues, country and rock and roll music with various travelling bands. He still exercises his passion for blues guitar by periodically performing with the local band The Blue Blazers.

The guitar put him through undergraduate and graduate school at USU, where he developed his other passion for state and local history. He was introduced early to the Archives and found considerable enthusiasm among his history professors for his proposed master’s thesis on Cache Valley dance halls and dance bands during the 1930s.

In 1987, Parson took a position as director of the Utah History Fair, the state affiliate for the National History Day program, concurrent with a quarter-time position in the Archives. In 1991, he moved full-time to the Archives where he has remained since.

He is the author of four books on local history, including two state centennial monographs, the History of Rich County and the History of Daggett County, the latter written with the late, and like-minded, Mike Johnson; A History of Ogden City, written with his friend and mentor Ross Peterson; and most recently, A History of Providence City.  He has written award-winning articles detailing episodes from the university’s past, as well as those relating to the Bear River (his river), an oxbow of which meanders to within 500 feet of the family home. 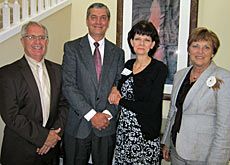 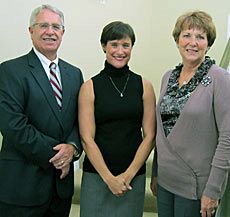 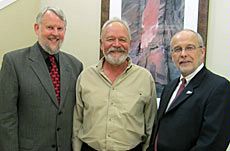