The Inaugural Professor Lecture Series is coordinated by the provost’s office and is hosted by President Stan Albrecht and First Lady Joyce Albrecht. Faculty members in the series have been promoted to full professor within the last academic year and present a lecture that highlights their research, creative activity or teaching at the university.

The first professor, and D.V.M. veterinary toxicologist, was Jeffrey Hall from the department of animal, dairy and veterinary sciences. Hall grew up in southern Oklahoma and received his bachelor’s degree in agricultural economics and his doctor of veterinary medicine degree from Oklahoma State University.

Hall, who has been at USU since 1996, served as the assistant director of the National Animal Poison Control Center and as the interim director of the diagnostic toxicology section while at the University of Illinois. All the while, he was still competing as a professional rodeo athlete. Hall is married to Catherine Hall, a registered nurse, who works in home health care.
The second professor, Susanne Janecke, received full professor status in the spring of 2008. Janecke works in the department of geology and lectured on the topic, “Is there a gene for Geology?”

Janecke stumbled into geology by chance after several years of aspiring to be a classical archeologist as an undergraduate at the University of Michigan. Today, she is married to another USU geology professor Jim Evans, and has continued her passion for the field.

Janecke’s research interests focus on tectonics, which, she says, allows her to study all aspects of geology. Her current projects include investigation of the San Jacinto fault zone, located about 20 miles west of California’s infamous San Andreas Fault. With colleagues, she’s determining that the fault may be younger and moving faster than earlier predictions.

The last professor to present was, C. Kim Chapman from the Southwest Extension Region. Chapman’s lecture was titled, “Extension Education is Risk Management!”
Upon completion of his master’s in animal breeding and genetics from USU, Kim accepted the position of field agent and director of wool grading operations at the Utah Wool Marketing Association in Salt Lake City. Later, Chapman would join USU in the fall of 1991, as the USU Extension agent in Rich County. Then, in 1997 he accepted the position of area animal scientist for the Southwest Extension Region based out of Richfield. This position carried with it statewide responsibility for sheep programming. He continued in that position until April 2009 when his position was modified to include a 30 percent County Director/4-H Agent assignment for Sevier County.

During his tenure at USU, Kim has authored or co-authored 8 peer-reviewed publications, 158 Extension articles, publications, proceedings papers, newsletters and popular press articles. He has delivered more than 200 presentations, developed or facilitated conferences, Extension seminars and field days. He is also active in the Utah Association of County Agricultural Agents, serving as president in 2004-2005. Additionally, he has served as the western vice-chair and national chair of the National Association of County Agricultural Agents’ Professional Improvement Council Animal Science Committee, organizing educational programs for other Extension agents from throughout the United States, and chaired the Western Extension, Research and Academic committee tasked with coordinating land-grant efforts in sheep and goat work.
Writer/contact: Sarah Reale, (435) 797-2759 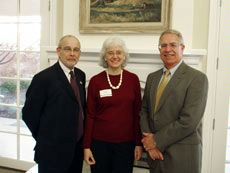