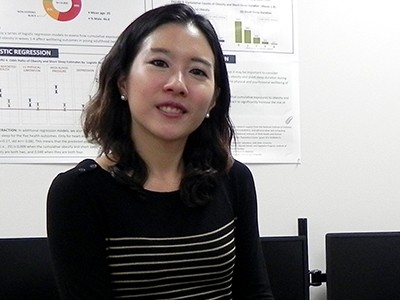 Sun Y. Jeon has been named the top Ph.D. researcher in the College of Humanities and Social Sciences. Jeon, who thinks in numbers, is researching statistical models for use in sociology.

She loves numbers. She thinks in numbers. And, says Sun Y. Jeon, “I dance with numbers.”

That passion is reflected in her undergraduate degree in engineering and the master’s degree in statistics she earned at Utah State University in late 2016.

But it is sociology — which studies the “whys” of humanity -- that puts flesh and faces on those numbers, says Jeon, who has been named the top Ph.D. researcher in the College of Humanities and Social Sciences.

“It gave me fresh perspective that, ‘OK, numbers are not everything. There are more approaches’,” said Jeon. Sociology “tells us something that we could never see by focusing on numbers.”

She hopes to capitalize on that perspective to find helpful solutions in her home country of South Korea where “suicide rates are going crazy,” she said. In fact, South Korea has the highest rate of suicide in the developed world.

She knows, however, that numbers will do the driving.

Jeon’s dissertation, which she defends next month, focuses on improving the scientific methods used to analyze raw data, says her graduate adviser, Eric Reither, a professor of sociology and CHaSS associate dean.

Jeon, he adds, “is increasingly recognized as a leader in innovative research methods -- and age-period-cohort modeling, in particular.” Indeed, Jeon and Reither are co-authors of a just-published article that tackles these issues in the American Journal of Sociology, which is recognized as a flagship journal in the field of sociology.

Age-period-cohort models—APC models for short—are a long-recognized method of crunching numbers in demographic research targeting health issues. Age refers to biological factors over the human life course; period to events that affect entire populations at a specific time, such as wars or economic recessions; and cohort to a specific generation of people, such as the baby boomers.

But APC models have provoked controversy among social scientists since their inception in the 1970s. “Research in this area is not for the faint of heart,” says Reither. “It’s a true war zone.”

The method’s main challenge is that these ways of thinking about time – age, period and cohort -- are deeply intertwined, making it difficult to separate them in statistical models. Jeon’s research seeks to establish the conditions in which the model can be used most effectively because, she explains, “we don’t want to just dump a whole methodology.”

Jeon uses advanced statistical methods to identify what causes APC models to crash and how to prevent such misapplications. Her research, she says, “will help those people who are still using this methodology in an incorrect way.”

According to Reither, their research has provided them with an opportunity to “work with a number of top scholars in demography who have shown that these models can work in practice.”

Jeon agrees. “We can overcome this issue with new ideas and new approaches.”

Jeon came to Logan six years ago from Sogang University in Seoul. One of her Korean professors, who had earned a degree from USU, praised the university. And then, in a happy coincidence, she was introduced to Richard Krannich, a longtime professor in USU’s sociology program, when he visited South Korea.

Upon completion of her doctorate, Jeon will seek research positions at major medical schools in the United States.

Jeon says she’ll continue to embrace the lessons of humanity — qualitative outcomes as well as quantitative.

“That is a huge driving force in my research,” she said. “My goal is not just presenting the ‘cool figure’ or introducing a new methodology, but to come up with effective policy that will help people and decrease the rate of suicide.”