During a virulent outbreak of cholera in mid-19th century London, physician John Snow doggedly went from door to door interviewing families of victims and piecing together evidence of disease transmission through contaminated water systems. With his collected data, Snow made a spot map that revealed the spatial distribution of cholera deaths – most clustered around a water pump in Soho’s Broad Street.

Snow’s ideas were largely dismissed by the medical establishment of the time, which was mostly ignorant of microbiology and stubbornly clung to miasma theory. But his work paved the way for modern epidemiology and use of spatial and spatiotemporal statistics to test dispersal theories of natural phenomena.

“These fields have burgeoned over the last few decades,” says USU statistician Mevin Hooten, who uses hierarchical models to determine how invasive species and diseases spread and change over time and space.

While knowledge of germ theory and the sophistication of tools for statistical analysis have grown markedly, he says, the threat of modern pandemics – bird flu, SARS – and the unknown consequences of invasive species foster as much fear and uncertainty as plagues of yore.

A forest ecologist by education and experience, Hooten, along with colleagues, recently applied emerging modeling methods to an invasive bird species gaining a foothold in North America. The team’s research was highlighted in “Hierarchical Spatiotemporal Matrix Models for Characterizing Invasions,” in the June 2007 issue of Biometrics.

“The survival, interaction and spread of species are key elements of ecology,” says Hooten, who joined USU’s Department of Mathematics and Statistics as an assistant professor in 2006. “The statistics community has developed models to determine the abundance of species but we need better tools for understanding the actual population size of different species – particularly, invasive species.”

In a study funded by the National Science Foundation and the U.S. Geological Survey, Hooten and co-investigators Christopher Wikle of the University of Missouri-Columbia and USGS scientists Robert Dorazio and Andrew Royle used a hierarchical Bayesian framework to explore the march of the Eurasian Collared-Dove westward from Florida, its probable point of entry.

The innocuous-looking gray bird, with a black half-collar at its nape, is now at mid-invasion, says Hooten. “ECD is a prolific species and may pose a threat to native ecosystems. We predict the bird will colonize the entire United States within a few decades.”

He notes that dove is even taking up residence in USU’s community. “Based on model predictions, we are on the cusp of a very rapid period of ECD population growth here in Logan.”

For Hooten and crew, the dove, disparaged by birders with such unflattering names as “scuzdove” and “Eurotrash,” offered a ready opportunity for testing the efficacy of their modeling methods. “Large scale ecological datasets that provide quantitative population information are rare,” he says. “Fortunately, the long-term monitoring efforts of the North American Breeding Bird Survey provided us with invasive species data to fuel our research.”

The advantage of his team’s method over other invasive species models, says Hooten, is its simplicity and flexibility. “It accommodates uncertainty and also provides tangible graphical and numerical output,” he says. “Ecologists and resource managers can use the results to understand ecological processes and make decisions.” 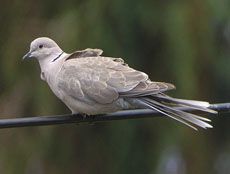 A prolific, invasive species, the Eurasian Collared-Dove is thought to have entered the U.S. in the 1980s and is rapidly spreading throughout the country, including Utah. Photo courtesy of Jay and Kevin McGowan, Cornell University Lab of Ornithology. 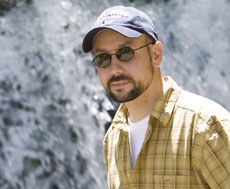 Statistician Mevin Hooten uses hierarchical models to determine how invasive species and diseases spread and change over time and space.