Utah State University students Jennifer Albretsen and Arthur W. Mahoney Jr. were named 2007 Goldwater Scholars by the Barry M. Goldwater Scholarship and Excellence in Education Foundation. USU student Jodie Tvedtnes was awarded an Honorable Mention in the prestigious competition.
The award includes a two-year scholarship of up to $7,500 per year.
A native of Waunakee, Wis., Albretsen is a second-year physics major, an Honors student and served as an Honors Fellow this past year. Following her freshman year at USU, Albretsen was selected for a National Science Foundation Research Experience for Undergraduates in nanotechnology at Dartmouth University – a rare opportunity for a first-year student.
Albretsen credits her NSF experience with changing her academic perspective. “I now want to be a part of scientific discovery for the rest of my career,” she said.
A Presidential Scholar and a University Undergraduate Research Fellow, Albretsen is conducting NASA-funded research with faculty mentor J.R. Dennison, physics professor, on the impact of space weather on NASA’s planned Solar Probe.
Albretsen’s career goals include earning a doctorate in physics to conduct research in materials and surface physics. She said she hopes to inspire future scientists in an academic setting.
A Cache Valley, Utah native, Mahoney is a second-year computer science major, an Honors student, a Presidential Scholar and a University Undergraduate Research Fellow. He and faculty mentor Dan Watson, associate professor, are developing an algorithm to improve communications among agents – such as robots or a collection of processors – operating in a large network.
With just one year of college behind him, Mahoney presented his and Watson’s research findings this past summer at the 2006 International Conference on Parallel and Distributed Processing, Techniques and Applications in Las Vegas.
Mahoney plans to pursue a doctorate in computer science with an emphasis on parallel computation and self-organizing networks. His career goals include teaching at the university level.
Both Albretsen and Mahoney were named 2006-07 Governor’s Scholars by Gov. Jon Huntsman Jr. in November.
Tvedtnes, who earned an associate’s degree from Salt Lake Community College, entered USU after receiving a Presidential Transfer Scholarship. She started her academic career in classics but switched her major to physics with minors in math and classics.
Tvedtnes, who serves as president of Utah State’s Society for Physics Students chapter, presented the research poster “Comparison of Satellite and Ground-Based Data on Polar Mesospheric Clouds” at the society’s 2006 Four Corners meeting. Her future plans include earning a doctorate in atmospheric physics and pursuing further study of upper atmospheric phenomena, particularly in the mesospheric region.
This year, 317 Goldwater Scholars were selected nationwide from a field of 1,110 mathematics, science and engineering students nominated by the faculties of their institutions. Twenty-eight of this year’s award recipients are math majors, 223 are science majors, 54 are majoring in engineering and 12 are computer science majors.
Past USU Goldwater Scholar honorees include Logan McKenna, electrical engineering; Heidi Wheelwright, physics; and Keith Warnick (Honorable Mention), physics; in 2006; Stephanie J. Chambers, biology and David Hatch, physics, in 2004; Jamie B. Jorgensen, physics, in 2002; Lara B. Anderson, physics, in 2001 and Jeff Jacobs, mechanical engineering, in 1998.
The Goldwater Scholar program was established by Congress in 1986 to foster academic excellence in science and mathematics in United States’ universities.
Contact: Christie Fox [clfox@cc.usu.edu], 435-797-3940
Writer: Mary-Ann Muffoletto [maryann.muffoletto@usu.edu], 435-797-1429 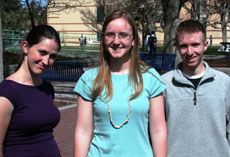