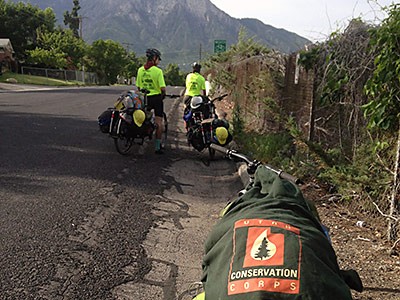 During summer 2015, its first field season, the award-winning USU-based bike crew completed 2.22 miles of trail improvement at East Canyon and Deer Creek state parks in Utah while traveling more than 530 miles using only cargo bicycles to transport themselves, tools, food and camping gear.

The coalition will present the award at a ceremony June 8, 2016, on Capitol Hill in Washington, D.C. The UCC will operate another bike crew that will begin maintenance on the Skyline Trail within the Uinta-Wasatch-Cache National Forest in June 2016.

The Coalition for Recreational Trails is a federation of national and regional trail-related organizations. The “Annual Achievement Awards” are the centerpiece of Great Outdoors Month,™ part of the Coalition’s ongoing effort to build awareness and appreciation of the national recreational trails program. The program is funded in all 50 states through the Federal Highway Administration to enhance the quantity and quality of trail experiences available to the public.

In 2015, 173 UCC AmeriCorps members created or maintained 85.3 miles of trail, constructed or repaired 58 miles of fence, restored 8,558 acres of public land and recruited 4,711 volunteers serving 9,582 hours on projects throughout Utah.

More information on UCC can be found online.