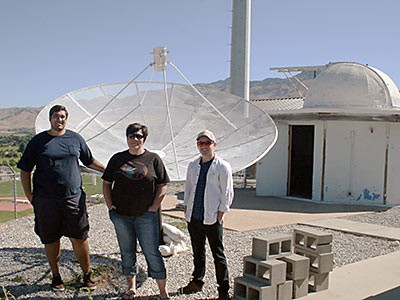 In the spirit of the growing “Maker Movement,” in which imaginative, self-reliant people of all ages are tinkering with an unlimited range of do-it-yourself projects, Utah State University students are reaching for the stars with cast-off equipment diverted from the junk heap.

“We’re going to map our galaxy with our newly constructed radio telescope observatory,” says undergraduate physics major Kenneth Zia. “It will take us about a year to collect a panoramic view.”

Radio telescopes, comprised primarily of a parabolic dish and a receiver, collect radio waves from space. Puerto Rico’s Arecibo Observatory is one of the world’s largest, with a dish measuring about a 1,000 feet in diameter. USU’s dish is more modest in size — less than two meters — but will operate in a similar manner.

“These devices measure what our eyes can’t see,” says Bryant Ward, another undergrad physicist who, along with Zia and fellow physics undergrad Vanessa Chambers, is spearheading the project. “Pretty much any celestial objects — stars, nebulae, galaxies — give off radio waves.”

To build the telescope, the students are using a satellite dish donated to the USU Chapter of the Society of Physics Students by Utah Public Radio in 2009. The chapter also received a grant from the national SPS organization to help launch the project.

“USU’s SPS members have been studying this project for a number of years, but it’s a senior-level project and people have graduated before it could be finished,” Chambers says. “But, this time, we have the team and components to get the telescope up and running.”

In addition to data collection, she says the project will be an ideal teaching tool to prepare physics students for upper-level research projects.

“Students can learn how to collect, read and analyze data before they advance to required capstone projects,” Chambers says.

Because the observatory will be in operation virtually every day for at least the next year, it will afford plenty of opportunities for student participation.

“Our telescope will be tuned to a frequency to map clouds of neutral hydrogen in a bandwidth called the ‘21-centimeter line,’” Zia says.  “This will allow us to produce a survey of the Milky Way Galaxy, which is a rather flat, spiral galaxy with an elliptical bulge in the middle.”

The telescope’s custom-built receiver, about the size of a desktop computer, is housed in the chapter’s old observatory building north of USU Housing Support Services on the campus bluff overlooking the Ralph Maughan Track and Maverick Stadium.

Like the satellite dish, the dome-shaped building is re-purposed equipment donated by a supporter that Aggie physicists hauled from California to the Logan campus in the early 1970s. Previously used by the Physics Department as a telescope observatory, it often competed unsuccessfully with stadium lights for views of the night sky and was replaced by the new USU Observatory, constructed by USU Facilities on top of the Science Engineering Research (SER) building, in 2010.

“It’s a bit windy up here and we’re a little concerned about the proximity to a cell phone tower, but we’re working those details out,” Chambers says.

Zia acknowledges the intrepid researchers face some cold nights at the observatory, but the approaching winter fails to dampen their enthusiasm. 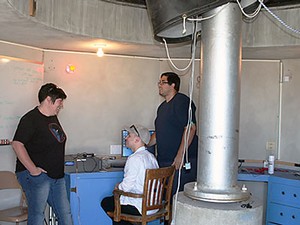 Inside the old USU Observatory north of USU Housing Support Services, undergrad physicists, from left, Vanessa Chambers, Bryant Ward and Kenneth Zia demonstrate how data will be collected from the team's radio telescope. 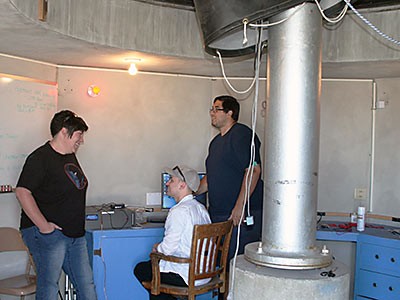