As seasoned international scholars can attest, study and work abroad carry a fair share of challenges that can derail the best laid plans. But Utah State University student Leah Hazlett offers a lesson in perseverance and a ‘why not?’ attitude in pursuing an educational and career-building dream.
The 25-year-old undergraduate learned last spring that she’d been offered a summer internship in Ethiopia’s office of the U.S. Agency for International Development. Taking advantage of the opportunity involved a flurry of obvious preparations — arranging travel funding, reserving airline tickets, securing proper documentation — along with one more critical consideration: Hazlett is the single mother of a six-year-old son.
The environmental studies major had visited Ethiopia previously in the summer of 2008 as a member of the College of Natural Resources’ Department of Environment and Society “Globalization: Human and Environmental Linkages in Ethiopia” class. Her son stayed with relatives during that trip but she was convinced that having him along for her second visit “would be a positive and essential experience for us both.”
“Visiting Ethiopia was a phenomenal, life-changing experience,” says Hazlett, who studied the impact of globalization on the east African country’s cut-flower industry during her 2008 trip. “The people, culture and countryside are beautiful.”
Still, arranging a trip for the pair was a daunting proposition. Along with the details and cost of having her child along, she worried about the same issue parents confront stateside, namely: who would take care of her son while she was at work?
“There were a lot of unknowns when it came to arranging for Tasen to accompany me to Ethiopia,” Hazlett says. “But I had a lot of incredible people here at USU and in Ethiopia rooting for me and working hard to make it happen.”
Rallying to Hazlett’s cause were her faculty mentor Layne Coppock “who put in a lot of time and effort to help with grant funding and other arrangements,” she says, along with Kay Forysth, director of USU’s Office of Study Abroad, and Patricia Stevens, now-retired director of the USU Women’s Center, who rounded up private support for young Tasen’s trip. Across the Atlantic, USAID official Joseph Hirschi handled a myriad of details to facilitate the family’s arrival and Getachew Gebru, a USU research associate with Coppock’s Ethiopia-based Pastoral Risk Management Project — PARIMA, located a nanny to care for Hazlett’s son.
“It was a big leap of faith and we hit some obstacles,” Hazlett says. “But as the date of our departure approached, I wasn’t about to give up. Everyone had invested a lot of energy in us and I was determined not to let them down.”
In Ethiopia, Hazlett and her son settled in a small apartment on the campus of a research institute in Addis Ababa, the country’s bustling capitol of four million. Each day, the intrepid mother set out for USAID/Ethiopia’s Business, Environment, Agriculture and Trade (BEAT) office by taxi, while Tasen enjoyed play dates, piano lessons, playground outings and movies.
USAID, funded by the U.S. State Department, has its largest African mission in Ethiopia, Hazlett says. USAID/Ethiopia, which coordinates efforts focused on environmental, health and economic issues, carries out its activities with a range of public and private partners, including USU-led PARIMA.
With USAID-contracted consultant Tom Caterson, Hazlett helped with evaluations of varied USAID-funded entities involved in tasks ranging from malaria and HIV prevention and treatment, to public education and school improvement, to watershed improvement and erosion reduction projects.
The landlocked nation has a number of rapidly growing urban areas, she says, but most of its population lives in rural areas. The country lacks a well-established, widespread infrastructure, which limits economic development and delivery of health and educational programs.
“I talked with many different groups,” she says. “Like their counterparts around the world, they’re facing budget cuts and trying to put their efforts into programs that will make the most impact — making their dollars go the farthest. But, overall, I was impressed with the optimism and ‘hands-on’ attitude of the people involved in USAID-funded efforts.”
Beyond the office, Hazlett and her son found opportunities for weekend trips to the countryside that offered glimpses of Ethiopia’s unique wildlife — including a too-close encounter with vervet monkeys that entered the family’s living quarters and pillaged their belongings.
“Not everything went smoothly,” Hazlett says. “Tasen experienced some homesickness and culture shock but, all in all, he approached the experience with curiosity and enthusiasm.”
Upon their return to Utah, she says her son surprised her with the comment that “home seems different now.”
“I can tell he’s still processing things and thinking about the trip,” Hazlett says. “He has a whole new view of the world having experienced a culture very different from what he was used to.”
For Hazlett, the trip revealed that an international career isn’t beyond her reach.
“Before, I felt like certain options for international education and career development weren’t available for me,” she says. “Now I can see that the opportunities are there, if you’re willing to go after them.”
Mary Hubbard, USU’s vice provost for International Education, agrees.
“Leah is a great role model for other students who may think international education isn’t a feasible option,” she says. “Pursuing these types of opportunities requires initiative and persistence, but our office is here to help students navigate the challenges. Experiencing a new culture and language and seeing the world from a whole new perspective is an invaluable learning opportunity.”
Related links:
Contact: Layne Coppock, 435-797-1262, layne.coppock@usu.edu
Contact: Leah Hazlett, l.hazlett@aggiemail.usu.edu
Writer: Mary-Ann Muffoletto, 435-797-3517, maryann.muffoletto@usu.edu 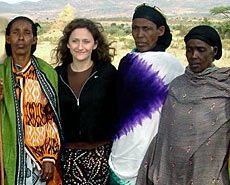 USU student Leah Hazlett, second from left, traveled to Ethiopia this past summer as a USAID intern. With support from colleagues at USU and in Ethiopia, she arranged for her six-year-old son to accompany her to Africa. 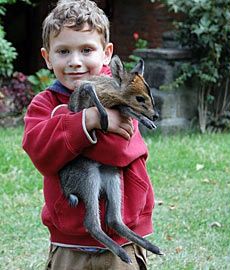 Hazlett's son Tasen holds a dik-dik, a small antelope native to the Horn of Africa. Hazlett and Tasen lived in an apartment on the campus of a research institute in the capitol city of Addis Ababa during their summer stay in Ethiopia.