Utah State University undergraduate Sara Huefner joined nearly 13,000 fellow scientists for the 236th national meeting of the American Chemical Society Aug. 17-21 in Philadelphia.
Huefner’s trip to the gathering of ACS, which proclaims itself the largest scientific society in the world, was funded by a USU Undergraduate Center for Integrated BioSystems Research Student Program grant, along with support from USU’s College of Science and the Department of Chemistry and Biochemistry.
Huefner, a dual chemistry and biochemistry major, presented the poster “Protein-Tyrosine Phosphatases: Comparing the Effects of Mutation on Protein Conformation and Catalysis” in the meeting’s undergraduate research poster session.
“For me, the meeting was a great success and I’m grateful for the opportunity to participate,” she says. “My presentation went very well. In fact, professors from Texas A&M and from Yale specifically encouraged me to apply to the graduate programs at their schools after I had explained my poster. I also met professors and grad school recruiters at other events, and I really enjoyed learning about the latest research at the meeting’s seminars.”
Through her research, which she conducts with faculty mentor Alvan Hengge, Huefner studies enzymes — proteins that trigger activity in living cells. Her efforts could contribute to understanding chemical processes that occur with cancer, diabetes and arthritis, as well as viral and bacterial infections.
“Enzymes control most processes a cell performs, from metabolism to proliferation,” Huefner says. “When enzyme pathways go awry, such as during an infection, the cell’s life-sustaining processes can be disrupted. We’re trying to better understand how certain enzymes function by measuring how their catalytic capabilities are affected when we engineer the enzyme to have mutations.”
Huefner’s project targets Protein-Tyrosine Phosphatase 1B or “PTP1B,” a human enzyme involved in regulating the body’s insulin uptake. Using recombinant DNA technology, she changed two amino acids in PTP1B — producing mutated forms of the enzyme — and examined the resultant effects on catalytic activity.
“Sara’s research required her to transform a strain of E.Coli, grow the bacteria, then isolate and purify the proteins,” Hengge says. “Following this, she used kinetics and fluorescence methods to characterize the enzymes and make comparisons between the mutants and the native form.”
Such research provides critical information about how diseases progress and identifies enzymes that could be targets for disease-fighting drugs, he says.
“Sara has been extremely productive in her research,” Hengge says. “She’s also an active participant in my lab’s weekly research group meetings, where her thoughtful questions contribute to our discussions.”
Hengge and Chemistry and Biochemistry Department Head Steve Scheiner also praise Huefner’s contributions beyond the lab and classroom.
“Sara served as president of the Chemistry and Biochemistry Club, USU’s student ACS affiliate chapter, and has helped coordinate a number of outreach programs to K-12 students,” Hengge says.
Scheiner notes that Huefner was instrumental in organizing the university-wide “Going Green Extravaganza” Earth Day celebration held this past April on the USU Quad.
“Sara’s leadership began a new event that elevates the importance of recycling and environmental concerns in the consciousness of students of all stripes,” he says.
Following graduation this fall, the Bountiful, Utah, native plans to pursue graduate study that incorporates her interests in chemistry, biochemistry and science writing.
“I might focus on nanobiochemistry and disease research,” she says. “And I’d like to do more science writing — maybe even science journalism.”
Related links:
USU Department of Chemistry and Biochemistry
USU College of Science
Contact: Sara Huefner, shuefner04@yahoo.com
Contact: Alvan Hengge (435) 797-3442, alvan.hengge@usu.edu
Writer: Mary-Ann Muffoletto (435) 797-3517, maryann.muffoletto@usu.edu 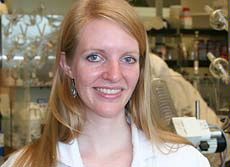 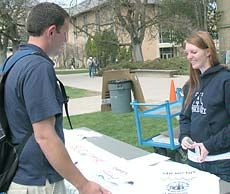