Utah State University student Arthur Mahoney, a senior computer science and computational mathematics major, was named Runner-up, Male Award in the Computing Research Association’s 2009 Outstanding Undergraduate Research Award competition. In this award category, Mahoney was among the top four finalists in the nation. He was among the top eight finalists in CRA’s 2008 competition.

Mahoney, who was named a Goldwater Scholar in 2007 and a Governor’s Scholar in 2006, has pursued research in five areas that have resulted in three publications, two of which list the undergraduate as first author. His research includes parallel path planning in large graphs, altruistic negotiation systems, developing novel parallel algorithms for extremely fast robotic motion planning, massively parallel search strategies for discovering novel cancer therapies and parallel tools for hydrologic prediction and flood forecasting that scale to massive data sets.

With faculty mentor Dan Watson, Mahoney developed an algorithm to improve communications among robots used in military, law enforcement and industrial applications that safely extend the reach of humans into dangerous environments.

“(September 11) raised a lot of issues for search and rescue,” he says. “Robots would be useful in searching – they are a lot more expendable than human lives.”

The Cache Valley native serves as administrator of the Computer Science Department’s computer cluster – a research tool Mahoney designed and assembled. In addition to maintaining a perfect GPA, Mahoney mentors fellow undergraduate researchers and serves as a tutor for the Mathematics and Statistics Department. 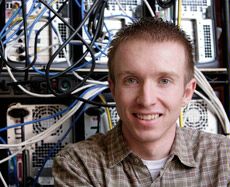 USU Goldwater Scholar Arthur Mahoney was among the top four finalists in the nation for the Computing Research Association's 2009 Outstanding Undergraduate Research Award.