“We raised an entirely new question with our research than what we started with,” says Fleming, College of Natural Resources Peak Prize Undergraduate Researcher of the Year. “But that’s how science goes. That’s why the world needs more scientists.”

“Brine shrimp are known to be a significant part of the birds’ diet,” she says. “If the shrimp are contaminated with mercury and passing it on to waterfowl, where are the shrimp taking in the toxic substance?”

A railroad causeway separating the north and south halves of the Great Salt Lake has led to the formation of a density-stratified deep brine layer in the South Arm of the lake.

“Anoxic, sulfur-rich conditions in the deep brine layer foster the formation of methylmercury,” says Fleming, a Quinney Scholar, who graduated from Provo’s Timpview High School in 2008. “There’s not enough oxygen at this layer for brine shrimp to survive, so our hunch was that the shrimp feed at the interface between the deep brine layer and the next highest, mixed layer of waters.”

To test their hypothesis, the researchers constructed clear, plastic cylinders in the lab and filled them with lake water simulating varied water layers, including a deep brine interface with high mercury levels. They conducted similar experiments in the field. The experiment design allowed them to track brine shrimp position at the different water layers.

“The columns were 1.5 meters- tall,” Fleming says. “We filled each column with different percentages of deep brine layer and mixed water layer, added live brine shrimp and used both stratified and mixed experiments.”

For 14 days, the researchers monitored shrimp positions, took samples and measured such water parameters as dissolved oxygen and chlorophyll.

The experiment’s results were a surprise.

“Our results show that, at least for our experiment design, the brine shrimp exposed to the toxic deep brine layer have lower concentrations of methylmercury compared to shrimp in the upper mixed layer of the lake,” Fleming says. “Still, methylmercury levels in the lake are through the roof. More research is needed to determine what’s happening and how to manage this issue.”

Fleming presented her research findings, which she and Wurtsbaugh will publish in an academic journal, at the 2011 American Society of Limnology and Oceanography annual conference held Feb. 13-18 in Puerto Rico.

“It was interesting to meet with scientists from around the world who are studying similar issues,” says the College of Natural Resources ambassador, who plans to pursue graduate studies in watershed science. “It was a great experience.”

Fleming, along with the university’s other Peak Prize undergraduate research award recipients, will be recognized in a noon ceremony Tuesday, March 29, in the Taggart Student Center International Lounge during USU Research Week. 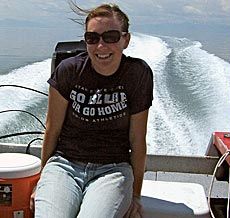 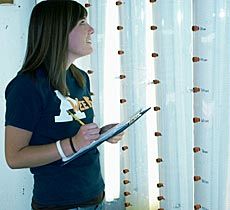