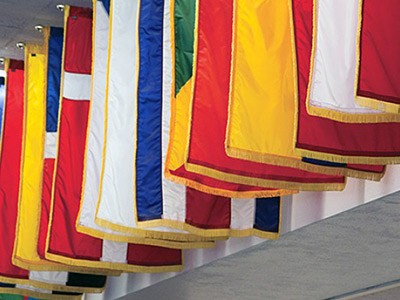 By Mandy Morgan in The Utah Statesman Thursday, April 23, 2015

Being informed on world news isn’t a normal part of Chris Crook’s daily life just because of his studies in political science — it is something he believes is important.

“I just think it makes sense, especially in a republic like we have where you actually get a chance to vote. It’s important to read up on the issues and know what’s going on so you can make important decisions,” said Crook, a junior majoring in economics and finance at Utah State University.

Student life doesn’t make for much free time to read the newspaper or watch the news, but finding a few issues students can daily read up on and be interested in could lead to being better informed, Crook said.

“There’s so much information out there,” he said. “Between all the news apps, it’s a 24-hour news cycle. I like the apps because I always have access to them on my phone, and if I have a free moment, I can check that out.”

Crook uses news apps BBC, Al Jazeera, Reuters and Associated Press (AP) to stay informed on national and international news. He also streams podcasts while at work and listens to CNN shows during free time on the weekends.

Many younger people believe they are left out of the decision-making process when it comes to legislation in the U.S., but the reason behind that is that they are not very involved with voting and reaching out to legislators, Crook said.

Many students believe it takes much more time and involvement to be sufficiently informed than is actually needed, said Damon Cann, an associate professor in the political science department.

“The bar is not that high,” Cann said. “It’s important that we’re paying attention so that we can hold our elected officials accountable, but we also need to let our elected officials go out and do their jobs because not every citizen can put in the time and effort to be well informed on everything the federal, state and local governments are doing.”

Paying attention to what happens on city and county levels is just as important as being informed on a national and international scale for students, Cann said.

“If your city government decides that they’re not going to repair their roads, that probably has a bigger impact on your day-to-day life … in ways that the federal may not affect your daily life,” he said.

Reading a mainstream newspaper daily can also give a general survey of what is going on and is something students should strive to do every day, Cann said.

Choosing a news outlet and following it daily is another way to be constantly informed without rigorous effort on the student’s part, he said.

“Students being involved and paying attention to what’s happening in local politics is important because with a little bit of information students can come, they can participate, they can vote and they can serve not only their own interests but the interests of generations of students to come,” Cann said.

A basic part of being educated is being informed, said Veronica Ward, a political science associate professor. She said being informed includes understanding not only what happens in the U.S. but issues and concerns around the world.

“It is a basic part of being an educated citizen, with the emphasis on citizen,” Ward said. “How can you be a good citizen if you are ill-informed? And yet then you are presented with having to vote into office individuals who could make decisions that could dramatically affect your life.”

Ward said she believes that if there were some way that each student was required to take at least one class on global issues during their undergraduate career, many more people would see the need to be involved and informed.

“Maybe they could first ask themselves, ‘When I look at my own life, are there certain parts of my life as a consumer that really affect me? Because I buy clothes, electronic devices. Let me check where they are being made,'” Ward said. “That’s much more direct … That would be a really immediate way to be informed.”