If you ask Cheng-Wei “Tom” Chang how he decided to pursue an academic career in organic chemistry, he’ll tell you it was an accident. The government school system in his native Taiwan determined from his college entrance exam that he was well-suited to science; his father suggested chemistry.

“I thought I’d study engineering because I’d always loved building things,” Chang says. “But I’ve come to realize chemistry wasn’t really an ‘accident.’ Rather, it was a series of a lot of accidents.”

The Utah State University chemist is jokingly referring to mishaps during his youth, while experimenting with his latest brainstorms and occasionally wreaking havoc with his self-crafted contraptions.

Chang shared his personal and professional journey through his talk, “Why I Do Research in Organic Chemistry,” which he presented to family and friends Nov. 7 at the USU President’s Home. His presentation was the fourth talk in the university’s 2013-14 Inaugural Professor Lecture Series. Coordinated by the Provost’s Office, the series highlights the accomplishments of faculty who have been promoted to full professor in the past year.

“Organic chemistry is a very creative discipline and is really about discovery,” says Chang, who joined USU’s Department of Chemistry and Biochemistry faculty in 2000.

The intrepid scientist says one look at his lineage is further evidence his chosen career path is no accident.

“I’m Hakka Chinese and can trace my heritage back more than 600 years to central China,” Chang says. “Hakka literally means ‘guest families’ and my ancestors have been pushed to migrate by other ethnic groups. We’re known as adventurers who venture into the unknown, so it’s built into my genes.”

Chang grew up in Hwa-Dong Valley, along Taiwan’s isolated east coast. After four years of study at Tunghai University, he served for two years as an infantry corporal in the Taiwanese Army. He returned to Tunghai for graduate study and later made his way to Washington University in St. Louis, where he earned his doctorate in 1997. After a postdoctoral stint at the University of Minnesota, Chang arrived at USU.

“Cache Valley reminds me of the valley where I grew up,” he says. “It was a welcome change after living in large cities.”

In his research ventures, Chang mentors a number of graduate and undergraduate students.

Beyond the lab, Chang pours his energy into the creation of intricately detailed paper models of military aircraft and war ships.

“I’m grateful to my family and the teachers and mentors who guided me in my youth,” he says. “I’m also grateful to my colleagues and students here at USU.”

USU Department of Chemistry and Biochemistry 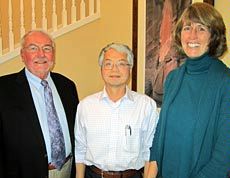 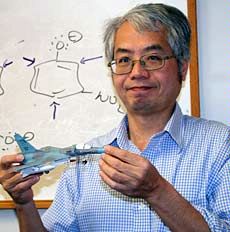