Along the fertile banks of the Nile River, a researcher from Utah State University is finding ways to turn a useless agricultural byproduct into something valuable while improving the region’s air quality in the process.

USTAR professor of biological engineering Foster Agblevor and his colleagues are developing a new method to break down and reuse some of the toughest and most abundant stuff on the planet — agricultural plant waste.

At many of Egypt’s rice, cotton and banana farms, plant residues, including leaves and stems are simply burned in the fields — a practice that contributes to a growing air quality problem that impacts the nation’s public health and threatens to deteriorate its ancient monuments.

“The open burning of agricultural waste produces particulate matter, volatile organic compounds and polycyclic aromatic hydrocarbons that are carcinogenic,” said Agblevor. “It also leads to air pollution and can cause asthma in children. Additionally, when the incomplete biomass combustion products settle on the pyramids, they make the limestone building blocks brittle, which will gradually destroy the pyramids and other ancient monuments.”

Agblevor will work with Egyptian researchers at the National Research Council in Cairo who will be responsible for developing new catalysts while the United States team works to improve the pyrolysis process. The researchers will also use oils produced from fractional catalytic pyrolysis to make bio-based polyurethane foam and novolac polymers that are commonly used to make home insulation, adhesives, varnishes and oil-based paints.

“Overall this research will demonstrate how to generate new and high-value plastic products from agricultural wastes that are widely available in Egypt and the United States,” said Agblevor. “The conversion of theses agricultural residues to bio-based materials has the potential to start new industries and create employment opportunities in rural Egypt and here in the United States.”

The project will also involve the participation of women scientists, including Dr. Maha Ibrahim; it will help train Egyptian junior researchers and involve a Utah-based graduate student. 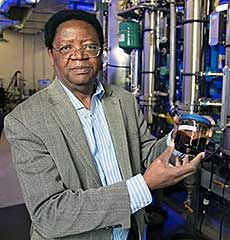