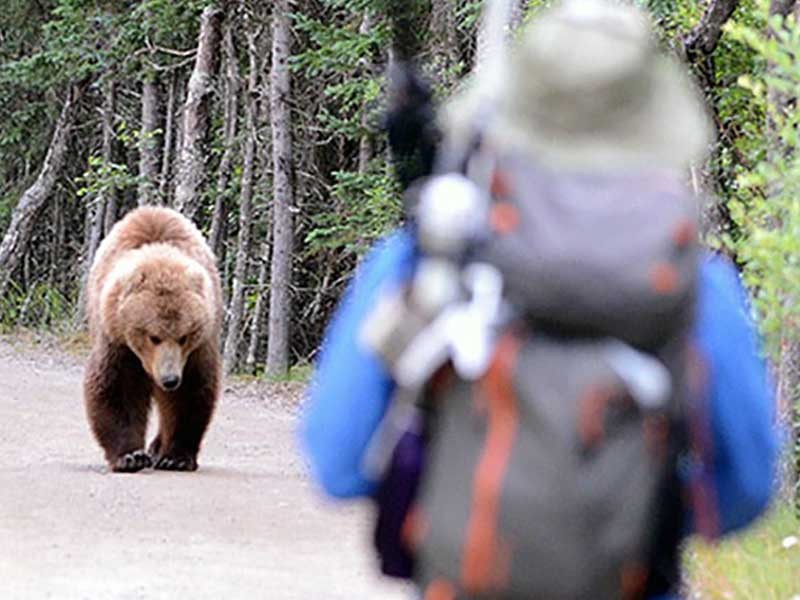 Some hikers in Yellowstone National Park carry bear spray religiously, and others just do not. Researcher Zach Miller wanted to find out why. Photo courtesy NPS/Jake Bortscheller.

Humans are a complex species. Convincing them to do something … like protect themselves from a grizzly attack … might seem like a straightforward task. But it’s not. Human-wildlife conflict is a challenge in many parks and protected areas, and is often the result of improper behavior on the human side of the equation.

Managers really want visitors to remain safe, but they sometimes struggle with communication strategies that actually achieve that. In recent research published in Human Dimensions of Wildlife, Zachary Miller, faculty fellow for the Institute of Outdoor Recreation and Research, used social psychological theory to examine how messaging at Yellowstone National Park could be better designed to influence safer behavior around bears.

Visitors can encounter a grizzly bear anywhere at Yellowstone. Bear spray can effectively deter aggressive animals, and is highly recommended by park officials. Some hikers carry bear spray religiously, and others just do not. Using a survey, Miller examined hikers’ perceptions about bear safety to predict whether or not they would carry the spray. If they chose not to carry it, he asked them why. Armed with this information, he developed tailored messages to inform and influence hiker behavior, including the following:

A Bear Doesn’t Care How Far You’re Hiking. People who were not carrying bear spray reported a belief that shorter hikes meant a reduced likelihood of encountering a bear. Although bear attacks occur less frequently in developed areas of Yellowstone, attacks have been documented in a variety of areas, including on many shorter hikes.

Carrying Bear Spray Reduces Potential Harm to Bears. Some hikers declined to carry bear spray because they thought it would harm the bear. But deterring an attack could save a bear’s life–-aggressive bears at Yellowstone are often euthanized.

There is No Such Thing as Too Much Bear Spray. More than half of people not carrying the spray stated that someone else in their group was responsible for it. No guidelines currently exist in the park for a preferred ratio of hikers in a group to cans of bear spray.

Carrying Bear Spray is a Priceless Investment. The majority of people not carrying bear spray expressed concern about the high cost. Many of their comments weighed costs with perceived risk from bears. To help lower the cost, there is an option in the park to rent bear spray, rather than purchase it.

Miller’s research focused on communication, but he also determined a few management actions that could increase the likelihood for hikers to carry bear spray. Creating more locations for bear spray rental would allow people concerned with cost to pursue compliance. Additionally, since no guidelines exist for the appropriate ratio between the size of a group and the number of cans of bear spray, many people in groups may think they are complying with safety suggestions, when they may not be following best practice. Managers may want to provide direction in their communications to remove ambiguity in this regard, Miller said.