“The real story here is the fuel,” Morgan says. “The science behind it, the research that goes into it and the fact that we have a real replacement for fossil fuels possibly in our hands right now.”

The “Aggie A-Salt,” as the USU-engineered diesel streamliner is formally known, topped 73 miles per hour at the Southern California Timing Association’s Speed Week held Aug. 10-16, 2013, at Utah’s Bonneville Salt Flats. That speed may seem unimpressive for most race cars, but the Aggie A-Salt surpassed the existing record set for its 1-liter, small diesel engine class — a vehicle class comparable to a riding lawn mower.

USU biochemistry professor Lance Seefeldt says the fuel could be a “game changer.”

“We take CO2 and sunlight and turn it into renewable fuel,” Seefeldt says. “We can (use the fuel) in existing engines and the tests we’ve already done show it works just as well as fuels like biodiesel from soy.”

The team’s next challenge is bringing down the cost of production. USU algae biofuel currently costs about $15 per gallon to produce. The researchers are confident they can reduce to the cost to compete with existing fuels.

The four-and-a-half-minute video was produced by Apogee Instruments, a Logan, Utah-based manufacturer of environmental instruments. The company was founded by USU professor Bruce Bugbee, an investigator on the algae biodiesel project and a faculty member in the university’s Department of Plants, Soils and Climate.

The sleek, Aggie-blue dragster was scheduled to race during the Utah Salt Flats Racing Association’s 2013 World of Speed Sept. 7-10, but the event was cancelled due to wet conditions. The team is seeking future opportunities to showcase the vehicle’s performance. 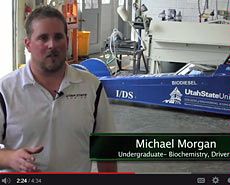 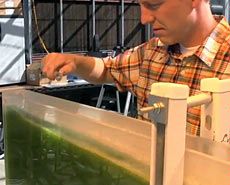 Team member Curtis Adams, who recently completed a doctoral degree from USU in crop physiology, explains how the researchers 'stress' the algae during growth to cause it to produce as many lipids - precursors to biodiesel – as possible.