“Some friends of mine who were working on the movie thought it would be fun to let me do the ‘scratch’ (temporary) voice for Rhino, who has a big, hyper personality and is a total fanboy of Bolt the dog,” Walton said. “It was expected that at some point a professional actor would be chosen to do the real voice, but after recording more and more dialogue for over a year, they finally decided they weren’t going to find anyone who would be as good of a match for Rhino as I was.”

Walton received his Bachelor of Fine Arts in art from USU in 1997. Through the contacts he made at the university, he got his first commercial art job as a video game artist and animator for Sculptured Software Inc., a videogame company in Salt Lake City at the time. In 1995, he started as an animation intern for Disney and two years later was hired by Walt Disney Feature Animation as a story artist. His work has appeared in films such as “Tarzan,” “The Emperor’s New Groove” and “Meet the Robinsons.”

“While I was at Utah State, I studied with the incomparable Glen Edwards, who was head of the department at the time, and he was, hands down, the best art teacher I’ve ever had,” Walton said. “I learned more from him in a few months than I had in years previous to coming to Utah State.”

Walton attributes his success at Disney to Edwards’ mentorship.

“When I expressed an interest in animation, Glen allowed several of us to do a short animated film for credit,” he said. “When I submitted my portfolio to Disney, all I had were the short film, my illustration and design assignments and some examples of the sketchpads I kept for those classes. I think the recruiters responded to my solid understanding of the fundamentals of art, illustration and design, as well as storytelling, personality and imagination that Glen always encouraged.” 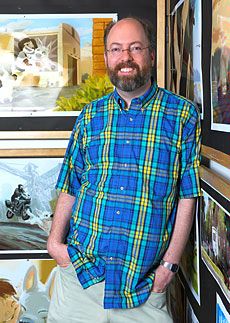 USU art graduate Mark Walton stars as the voice of Rhino the hamster in Disney's new movie, "Bolt," which opened in theaters Nov. 21.