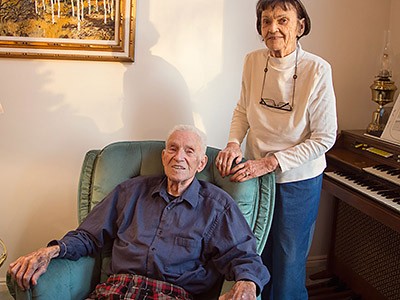 John "Burt" Millard and his wife, Alma Millard, are leaving a legacy that will impact future engineering students at Utah State University.

Longtime Cache Valley resident and World War II veteran John “Burt” Millard and his wife, Alma Millard, are leaving a legacy that will impact future engineering students at Utah State University for many years to come.

Millard, who turns 95 in March, contributed a gift of $250,000 in January 2015 for the creation of a scholarship endowment that will benefit College of Engineering undergraduate students and provide funding for student projects, competitions and special events.

The John and Alma Millard Scholarship Endowment Fund in the College of Engineering will establish an annual scholarship awarded to a junior or senior full-time student pursuing an undergraduate degree in the Mechanical and Aerospace Engineering department.

First Lt. Col. Millard was born in 1920 in Preston, Idaho. At age 4 he moved to Logan and later attended Utah State University where he studied engineering and enrolled in civilian pilot training through ROTC.

With the war underway, Millard put his education on hold and commissioned in the Army Air Corps. By the fall of 1943, Millard was working as a pilot aboard a B-17 Flying Fortress, flying training missions and preparing for deployment to Great Ashfield Air Base in England.

Millard flew a total of 35 bombing missions over Germany and survived anti-aircraft guns and aerial fighters.

After returning home he worked in construction and later became a metallurgical engineer at what is now ATK where he helped develop nozzle and ignition technologies used on rockets and the space shuttle boosters.

Millard said he wants to give back to help engineering students get the most from their education at USU.

“When I was in school, my father paid my way,” he said. “Some of my classmates had to drop out by the time they were freshmen or sophomores because of financial reasons. This is my way of giving back.”

College of Engineering Dean Christine Hailey thanked the Millards for their support.

“I am grateful to the Millard family for their generosity,” she said. “Engineering students receiving scholarships from the Millard Endowment will benefit from the financial support. They will also learn about and be inspired by John Millard’s contributions to his country and to the profession of engineering.”

Scholarships from this new endowment will be awarded based on a student’s financial need and academic standing in the College of Engineering. It’s anticipated the first award will be available for the fall 2015 semester.

The Millards live in Smithfield and have four children. 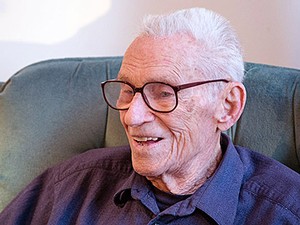 Millard, who turns 95 in March, contributed a gift for the creation of a scholarship endowment that will benefit College of Engineering undergraduate students and provide funding for student projects, competitions and special events. 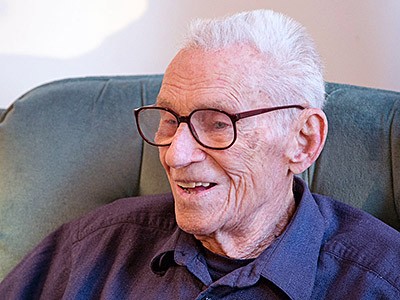