For the fourth year in a row, Utah State University’s athletics department has been recognized as one of the most efficient in the nation. This year it placed sixth for the Excellence in Management Cup presented by Texas A&M’s Laboratory for the Study of Intercollegiate Athletics (LSIA).

Utah State won the national championship in 2009, finished third nationally in 2010 and fourth a year ago.

“To be ranked among the top six economically efficient institutions in each of the last four years is a continued indicator of the return on investment that our university community, students and stakeholders receive in exchange for their support of Aggie Athletics,” said USU Director of Athletics Scott Barnes.

For the fourth-straight year, the EM Cup results have shown that major universities may not be running as economically sound as their smaller counterparts. Eight of the top ten universities in the final standings are from non-BCS affiliated universities.

Scoring is calculated in a formula that accounts for total athletic department spending, number of sports played and the number of championships won by each Division I university. Because of the difficulty in winning national championships, the formula was adjusted two years ago to place more emphasis on programs that excel on the national stage.

For a complete list of results and additional information of the Excellence in Management Cup results, visit the Laboratory for the Study of Intercollegiate Athletics website. 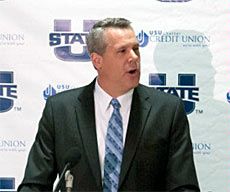