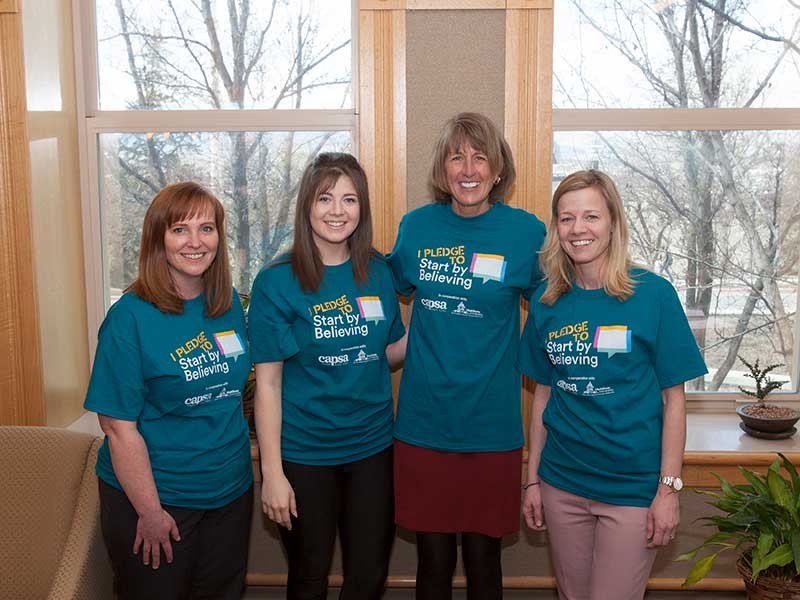 Utah State University is partnering with Citizens Against Physical and Sexual Abuse to change the way the community responds to disclosures of sexual violence on campus and in the community.

USU’s 2017 Campus Climate Survey on Sexual Misconduct revealed only a small minority of sexual assault victims report their experience to law enforcement or file a formal complaint with university authorities. More than a third of victims did not tell anyone at all. Those who told no one commonly cited concerns about privacy, shame, the seriousness of their experience, and the fear they would be blamed or not believed.

“This really highlights the importance of how we respond to disclosures of sexual assault,” said Noelle Cockett, USU president. “How we respond affects everyone. A negative or indifferent response – disbelief, blaming, questioning, minimizing – can worsen a victim’s trauma and make it less likely they will report to police or seek the help they need.”

It also makes it less likely that perpetrators of sexual violence will be held accountable, leading to future victims.

“As a nonprofit community-based domestic violence, sexual assault and rape recovery center, we work with survivors of abuse every day,” said CAPSA’s executive director, Jill Anderson. “We know that when clients are believed and supported they receive more support services, have better outcomes, and are more willing to work through the legal system.”

The university will provide booths on Start by Believing Day, April 4, in the library foyer and in the TSC where students, staff, faculty and other community members can stop by and make a pledge to Start by Believing and support victims. In addition, CAPSA will share the message of Start by Believing at events throughout April, including Baby Animal Days at the American West Heritage Center.

USU has also involved students academically in the campaign. Candi Carter Olson, assistant professor in journalism and communication, invited involved her students in Gender and the Media class to create public service announcements about the Start by Believing message.

“Students are the heart of USU,” said Olson. “Having their creativity and voices to help us build campaigns that unify and inform the entire community is an important part of the overall conversation.” Students also had the chance to learn more about working with a client, the university in this case, to find the perfect creative message that would appeal to Aggies.