Neal Hengge, a junior majoring in biological engineering, might be considered among the possible candidates to be featured in a promotional poster promoting undergraduate research at Utah State University. He’s focused, articulate, dedicated and passionate.

And while he’s earning his chops as a researcher and scientist, he’s well rounded. He lives on campus to fully appreciate the college experience — he’s based at Honors House at the Living Learning Center. He enjoys the full range of college activities and classes while working in the lab of Charles Miller, a professor in the Department of Biological Engineering.

Try getting all that on a poster.

In the past year, Hengge has added another impressive credit to his accomplishments. He is a recipient of a 2012 ASM Undergraduate Research Fellowship Award, presented by the American Society of Microbiology.

In its press announcement, ASM said the fellowship is aimed at “highly competitive students who wish to pursue graduate careers in microbiology.”

Winning fellows have the opportunity to conduct full-time summer research at their institution with a mentor and present their research results, if their abstract is accepted, at the 113th ASM General Meeting in Denver, Colo.

Hengge spent summer 2012 working with Miller, his USU mentor, on a project titled — and it’s a mouthful — “Isolation and Characterization of Novel Solvent Producing Clostridium from the Logan City Wastewater Lagoon System.”

“Neal is an exceptionally motivated undergraduate student in our Biological Engineering Department,” professor Miller said. “I have found Neal to be driven, responsible and capable of learning both technically and practically. Neal is dedicated to performing quality research and generating exciting results. ”

When asked about the project, Hengge’s enthusiasm is apparent.

“This research relates to alternative energy and biofuels,” Hengge said. “I’m passionate about creating biofuels and ways to replace fossil fuel and the growing concerns with its continued use, including economic and environmental.”

And as Hengge’s research project could have attractive results, the research reality wasn’t quite so attractive. Over the summer he made multiple trips to the waste water ponds west of Logan to gather samples. In his research he hopes to determine yields of acetone, butanol and ethanol (ABE) that are produced by bacteria that ferment sugars, generating ABE as a byproduct. A unique part of the study is using algae, a renewable resource, as a feedstock for the biosolvent production. That’s what led him to the waste water ponds. There is an abundance of algae to fuel his study.

The results look promising and Hengge’s summer work continues in the lab. He expects to submit his abstract to ASM sometime in December.

The ASM fellowship program is competitive. This year, 122 applications were received and 56 fellowships were awarded. Each fellow receives a cash stipend up to $4,000, a two-year ASM student membership and funding for travel expenses to the ASM presentation session at the general meeting.

Hengge now works in Miller’s lab, but he got his undergraduate research start earlier as a student at InTech Collegiate High School by working in Lance Seefeldt’s lab where he first shadowed a doctoral student. As he finished high school he received an undergraduate research fellowship upon entering USU. Then, settling on his major, he talked to Department Head Ron Sims who described the multiple research options available working with faculty and labs in the department, and the biofuel option was a perfect fit.

In addition to his work with professor Miller, he has a working relationship with one of Miller’s graduate students, Josh Ellis.

“Working in this lab has been a great experience,” Hengge said. “The research is exciting and the opportunities have been great. I was able to co-author a paper with Josh and professor Miller that’s been published. Coming to Utah State University was the best decision I’ve ever made. I can’t imagine having a better undergraduate research experience.”

“These conferences give me an amazing opportunity to talk with judges and other people from industrial companies about my research,” Hengge said.

And while Hengge is pleased with his decision to come to USU, it was helped a bit by a campus guide at another university campus who, during the site tour said, “if anyone is interested in engineering, Utah State University is really the place to go.”

As Hengge focuses on completing his degree at Utah State, he has started to survey a variety of graduate schools and labs and, as he prepares to move on, he credits his parents for providing support that contributes to his broad interests and success. Both have USU ties; his father, Alvan, is department head in chemistry and biochestry, and his mother, Maribeth Evensen-Hengge, is an immigration advisor in the Office of International Students and Scholars and has an extensive background in performing and the arts.

“My parents have been very supportive and provided the best of the sciences and the arts for me,” Hengge said. “Whether it’s attending a Science Unwrapped activity or seeing a play at the Caine Lyric Theatre or attending the opera, it’s all contributed to my being the person I am today.”

In his fellowship application, Hengge described his goals.

“My scientific interests lie in discovering ways to make current sustainable energy sources more efficient and economically viable,” he wrote. “I want to work in a university lab that focuses on using microorganisms to produce useful products by exploiting and manipulating their metabolic processes. I hope my research will provide a bridge between laboratory research and industry, providing an alternative method for biofuels to be produced and marketed.”

Bring on the poster. 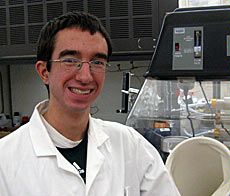 USU undergraduate researcher Neal Hengge in the lab with the anaerobic chamber, where he places bacteria in the controlled chamber so they can 'grow.' Hengge is a recipient of a 2012 ASM Undergraduate Research Fellowship Award.