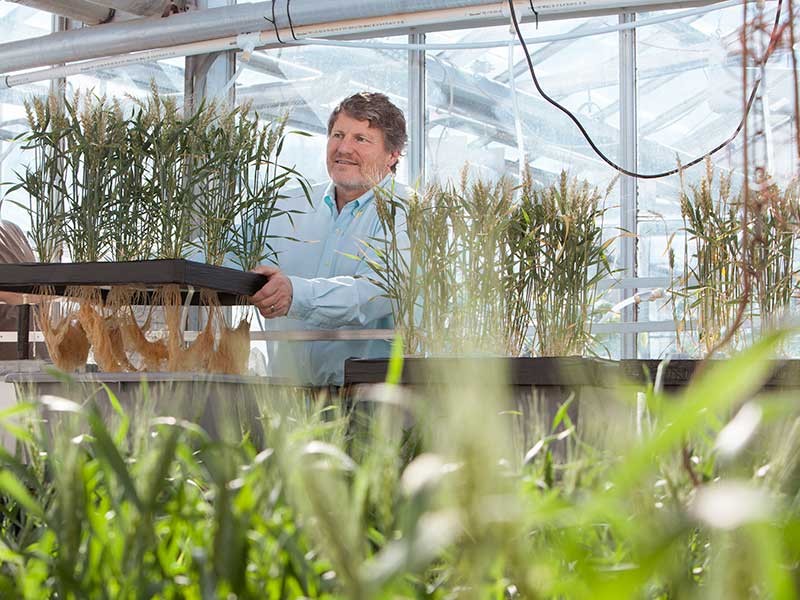 Utah State University Professor Bruce Bugbee has been named a Fellow of the American Society of Agronomy (ASA), the professional society of crop and soil scientists, educators and practitioners who work to discovery and apply agronomic solutions to feed and sustain the world.

Being designated a fellow is among the society’s top honors and just .3 percent of the society’s active and emeritus members may be elected Fellows at any one time. Bugbee formally received the recognition during the ASA’s meeting annual meeting this month in Baltimore, MD.

“Being named fellow in our professional societies is among the highest honors for our faculty,” said Professor Paul Johnson, head of USU’s Department of Plants, Soils and Climate. “It says loudly that Bruce is among the best in his discipline. Nominations for fellow are reviewed by peers and it often takes more than one, or even several, tries to be successful. Having Bruce named in his first nomination shows that his body of scientific work, service to the society, and academic reputation are truly stellar.”

Bugbee teaches plant nutrition, environmental instrumentation and plant physiology. His research focuses on growing crops in controlled environments, such as in green houses and growth chambers with artificial light, soil media and climate controls. It includes work with NASA on problems of plant production aboard spacecraft and to sustain longer-term human exploration of space. He is an author of more than 340 articles in scientific journals, 12 books or book chapters and has given a number of invited talks at professional meetings and at other universities. He was also a presenter at a USU TEDx event with a talk titled, Turning Water into Food, which can be viewed at https://tinyurl.com/BugbeeTEDx.

Bugbee is a past chair of the ASA’S Crop Physiology Division, received USU’s top research honor, the D. Wynn Thorne Career Research Award, in 2016, and was named the College of Agriculture and Applied Sciences’ 2015 Distinguished Professor, in addition to other USU awards for teaching and mentoring graduate students. In 2012, Bugbee was awarded the Utah Governor’s Medal for Science. In working out limitations and difficulties with existing sensors used in his research, Bugbee began modifying equipment, such as volt meters, and turned his garage workshop tinkering into founding Apogee Instruments in 1996, a company that currently employs more than 30 people and sells environmental sensors to scientists worldwide.

Learn more about one of Bugbee’s passions, producing food for space exploration, in an essay titled The Martian: Farming on Mars is Not Science Fiction that he was invited to write for Huffington Post regarding the science involved in the film, The Martian, at huffingtonpost.com/author/bruce-bugbee.