The 2011 discovery of four ancient teeth, the remains of forgotten trees long ago preserved in searing volcanic ash and fossilized leaves on Rusinga Island in Africa’s massive Lake Victoria has shed new light on the habitat of early apes known as Proconsul.

“We now have definitive evidence Proconsul lived in more than one habitat and one of those was a dense, closed-canopy, tropical forest,” says Utah State University forest ecologist Jim Lutz.

Lutz and a multi-university team of colleagues published breakthrough findings about the now extinct genus of primates that lived some 18 to 20 million years ago in the Feb. 18, 2014, issue of Nature Communications.

“By examining the ancient trees’ stump casts, calcified roots and fossil leaves, as well as soil at the site of the teeth discoveries, we were able to determine the existence of a forested environment,” says Lutz, assistant professor in USU’s Department of Wildland Resources and the USU Ecology Center.

Situated at the mouth of Kenya’s Winam Gulf, Rusinga Island is the site of Louis and Mary Leakey’s famed Miocene-epoch Proconsul fossil discoveries about 80 years ago.

Geologist Daniel Peppe, a study member from Baylor University, says previous work at the island’s fossil sites yielded a variety of contradictory environmental preferences for the fruit-eating primates, which displayed a mixture of Old World monkey and ape characteristics. None of this research, however, could definitively tie Proconsul to a specific habitat.

“The varying diameters of the tree stumps coupled with their density within one “paleosol,” or fossil soil, implies that the forest would have been comprised of trees with interlocking or overlapping branches, thus creating a canopy,” says Michel, lead author of the study.

She adds further evidence from the excavation site has shown the landscape was stable for tens to a few hundred years, while the forest grew.

The researchers were also able to determine the climate for the fossil forest. Evidence from the paleosol suggests seasonal precipitation with distinct wet and dry periods, Peppe says.

Lutz considers the study a triumph of interdisciplinary collaboration.

“By bringing our respective areas of expertise together, we were able to piece together the evidence and arrive a definitive conclusion,” says the USU scientist, who became acquainted with his multi-institution colleagues through a 2011 National Science Foundation and NASA-funded DISCCRS (Dissertations Initiative for the Advancement of Climate Change Research) — pronounced “discourse” — symposium in Colorado. “The scientific community often talks about interdisciplinary research, but it doesn’t always happen. This is an example of the value of this kind of collaboration.” 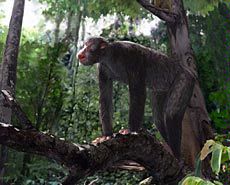 Artist's depiction of 'Proconsul,’ an extinct primate that lived in a forested habitat some 18 to 20 million years ago. USU ecologist Jim Lutz contributed to new discoveries about the ape, published in ‘Nature Communications.’ Credit: Jason Brougham. 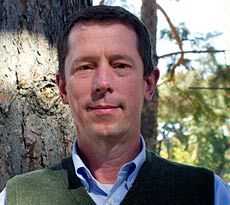 Jim Lutz, forest ecologist in USU's Department of Wildland Resources and the USU Ecology Center, says the team’s findings are a triumph of interdisciplinary collaboration.