With colleagues Tim Coulson of Imperial College London, Daniel Stahler and Douglas Smith of the U.S. National Park Service, Bridgett vonHoldt of University of California, Irvine and Robert Wayne of University of California, Los Angeles, MacNulty shares a new method for assessing wildlife response to environmental change in the Dec. 2, 2011, issue of the journal Science. Findings from he and his team’s study, which was partially funded by the National Science Foundation, may ultimately improve predictions of wildlife responses to environmental changes in many ecosystems.

The novelty of the research team’s method, says MacNulty, assistant professor in USU’s Department of Wildland Resources, is bridging the gap between ecology and evolution – disciplines biologists usually treat separately.

“The problem is that environmental change, including climate warming, can cause rapid evolution at the same time it increases or decreases population size,” MacNulty says. “So we developed a method to simultaneously examine the ecological and evolutionary consequences of environmental change and applied it to wolves living in Yellowstone National Park.”

Yellowstone wolves are ideal for the research team’s study for a number of reasons, he says.

Because wolves are top predators, their response to environmental change can have cascading effects on other species within the system. Secondly, with 11 years of data collected by the Yellowstone Wolf Project, the team has both evolutionary and ecological data to construct their model.

“Among the data collected from Yellowstone wolves is information about the gene that determines coat color: black or gray,” MacNulty says. “It’s hard to find a wildlife gene with a known function. So this makes this particular gene a very useful one for describing eco-evolutionary dynamics.”

Along with genetic data on coat color, the scientists have years of ecological data on the shifting size of the Yellowstone wolf population.

“Such disparate ecological and evolutionary data are rarely available for wildlife populations,” he says.

Coulson, lead author on the paper, says while the team’s model sheds light on an important issue, it also yields “a bit of a conundrum.”

“We now have a way to predict with unprecedented detail how populations will respond to environmental change,” he says. “But for most systems, we simply don’t have sufficient information to confidently make predictions. We urgently need more data if we are to understand how the natural world will be affected by continuing climate change.” 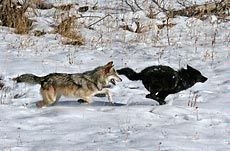 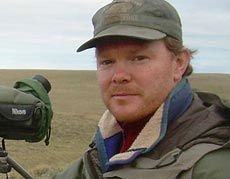 Findings from an NSF-funded study by MacNulty, assistant professor in USU's Department of Wildland Resources, and colleagues appear in the Dec. 2, 2011 issue of 'Science.’