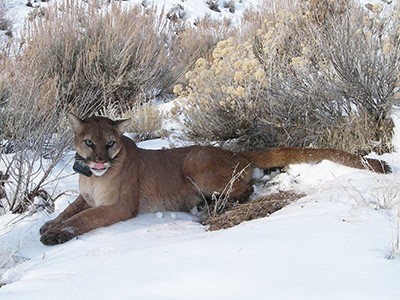 The world’s wild animals have an important story to tell us about a changing climate and satellites, with their privileged vantage point, can interpret that message. That’s the conclusion of a trio of scientists, including Utah State University wildlife ecologist David Stoner, reporting from the 2016 Fall Meeting of the American Geophysical Union in San Francisco.

In a Dec. 12 press conference, Stoner, with colleagues Kristin Laidre of the University of Washington’s Polar Science Center and Andrey Petrov of the University of Northern Iowa, detailed their respective field studies, ranging from the Arctic to the Mojave Desert, of habitat change and species response. A common thread in their research is the critical contribution of NASA’s satellite imagery in documenting ecological change over time and space.

“Wildlife managers need estimates of abundance,” said Stoner, who referenced a NASA-funded study of mule deer and mountain lion distribution he conducted in Utah, Nevada and Arizona with USU colleague Tom Edwards, along with partners from Northern Arizona University, the University of Maryland, the U.S. Geological Survey and the Utah Division of Wildlife Resources.

“Measuring the abundance of mule deer in the western United States is logistically difficult, hazardous and very expensive – for mountain lions, a predator of deer, it’s even worse,” he said. “But measuring changes in vegetation, the food of mule deer, with satellite imagery is relatively easy and more affordable.”

With the collected data, Stoner, a postdoctoral fellow in USU’s Department of Wildland Resources and the USU Ecology Center, and his colleagues developed a model wildlife managers can use to estimate the density of predators and prey.

“As popular game animals, mule deer bring millions of dollars of economic benefit into the states they inhabit,” Stoner said. “But drought drives deer into human-irrigated landscapes, in which the animals cause adverse economic impacts, including vehicle collisions and damage to crops and residential landscapes.”

Satellite imagery, he said, gives managers a leg up on predicting population numbers and forecasting the distribution, abundance and migration of animals.

“Climate projections for the American Southwest suggest longer droughts and northward expansion of the monsoon,” Stoner said. “These changes could cause deer and mountain lion habitat to contract.”

“The work discussed (by these three scientists) at the (Dec. 12) press conference is emblematic of the many ways in which satellite remote sensing supports our efforts at natural resource management and wildlife conservation,” said Woody Turner, program scientist for NASA’s Biological Diversity Program and an organizer of the press conference. 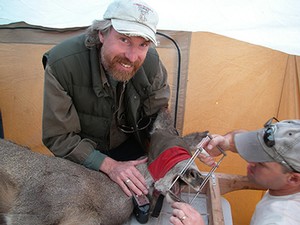 USU ecologist David Stoner, left, and Utah Division of Wildlife Resources biologist Kent Hersey measure a deer's teeth to estimate its age. Stoner says prolonged drought is decreasing deer habitat along with that of its predator, the mountain lion. 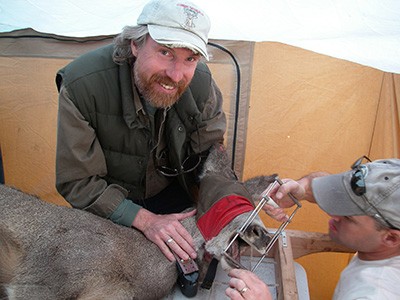