Habitat restoration is a critical step in river restoration but it also takes a well-functioning food web to sustain a river as an ecosystem, says Utah State University ecologist Nancy Huntly.

“Food webs are often overlooked,” says Huntly, director of the USU Ecology Center and professor in the university’s Department of Biology. “We have to determine if there’s enough for every species in the ecosystem to eat.”

Using data collected from years of restoration activities on the Columbia, the ecologists illustrate factors underpinning the success or lack of success of conservation efforts.

“After reviewing scientific literature about research activities in the Columbia River Basin, we identified holes in the way we think about nature,” Huntly says. “The Columbia River has been altered drastically since Lewis and Clark’s early 19th century expedition and there are issues that aren’t being adequately addressed.”

Habitat carrying capacity, she says, refers to the number or biomass of organisms that can achieve adequate food and growth needed to support their populations through time.

“The Columbia River Basin, like many rivers around the world, isn’t the same as it was a hundred years ago,” Huntly says. “With the introduction of invasive species and with large populations of artificially raised fishes from hatcheries, we don’t know if the river can support all the species living within it.”

Though the basin is a well-studied site, the ecologists found a lack of fundamental knowledge about food web structures, such as the ecosystem’s biodiversity and its critical feeding linkages. Current knowledge about the river’s hybrid food webs, containing mixtures of native and invasive species, reveals a prevalence of nonnative species, along with gaps in knowledge of connections between producers and consumers.

“The amount of contaminants entering the river — fertilizers, pesticides, pharmaceuticals, personal hygiene products — is astounding,” she says. “And we really don’t know the full scope of how they’re affecting various species.”

Bottom line, Huntly says, is the need for a better understanding of what a healthy food web is.

“Management approaches need a thorough food web perspective for successful conservation,” she says. “Ideally, actions should aim to protect the ecosystems, rather than restoring or reclaiming them after the damage is done.” 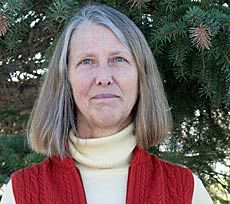 Nancy Huntly, director of the USU Ecology Center, is among authors of a perspective paper on river ecosystem food webs featured in the Nov. 26 online edition of the 'Proceedings of the National Academy of Sciences.' 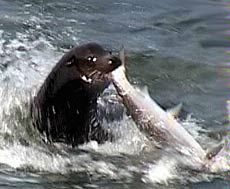 In the Pacific Northwest's Columbia River, a sea lion snags a salmon. Huntly and colleagues stress the importance of food webs in sustaining river ecosystems. Courtesy Oregon Department of Fish and Wildlife.