For centuries, humans, wildlife and livestock have co-existed in a synergistic balance that’s allowed the Mediterranean’s unique cork oak forests to thrive. But cultural and economic shifts in recent decades threaten the iconic ecosystem along with wildlife that depend on it for survival.

Utah State University ecologist Ron Ryel is among scientists involved in the formation of conservation plans to preserve Portugal’s imperiled cork oak woodlands. Selected for the 2010 Fulbright Specialists Program, Ryel is working with a team led by the Forest Research Center of Portugal’s Technical University of Lisbon.

“Portugal’s cork oak forests are a great example of a human-managed ecosystem that’s been both sustainable and profitable for generations,” says Ryel, associate professor in USU’s Department of Wildland Resources. “But, due to a variety of factors, that’s changing.”

Ecologists often study effects of human use of landscapes, he says. “What’s occurring with Portugal’s cork oak forests is a fascinating study of what happens when people abandon long-practiced uses of a landscape.”

Ancient forests of cork oak (Quercus suber) in Portugal’s Alentejo region produce more than half of the world’s cork supply. The medium-sized evergreens live between 150 to 250 years. Trees can first be harvested for cork, which doesn’t harm the tree, at about 25 years of age. Subsequent harvests, after the bark has regrown, are made at nine to 12 year intervals; about 12 times in the tree’s lifetime.

Used in a variety of ways for thousands of years, cork oak has long been valued for its energy-rich acorns that provide supplemental feed for domestic animals that graze on the trees’ understory plants.

Cork’s most popular application, however, emerged in the early 17th century, when Benedictine monk Dom Pérignon chose it as the perfect stopper for his champagne. Its usage blossomed with the spread of mass-produced glass bottles and bottles of wine produced throughout the world carry this Portuguese souvenir.

These days, however, more and more wine bottles sport a metal screw-top and plastic stopper, if they come in a glass bottle at all, and cork producers fear more vintners will move away from traditional cork.

At the same time, Portugal’s livestock industry, with its accompanying grazing that keeps the montados (cork oak woodlands) free of shrub encroachment, is dwindling.

“As members of the European Union, Portuguese consumers now have access to meat and dairy products that are less expensive than those produced in their own country,” Ryel says.

Declines in both cork and livestock production could lead to sell-off of long-held family farms, followed by abandonment – and no management – of forest stands or clearing of forests for development.

The corresponding decrease in grazing pressure has allowed shrubs such as the white-flowered gum rockrose to flourish in cork oak stands. Shrub encroachment heightens wildfire danger, which threatens trees.

The thick insulating bark of the cork oak allows it some protection from fire and the ability to regenerate quickly after a burn. But an ancient tree is no match for a voracious wildfire fueled by overgrown dry shrubs. Loss of trees can lead to growth of invasive plants and soil erosion.

The decline of cork oak forests also threatens biodiversity. The Alentejo, which means “Beyond the Tejo (River)” in Portuguese, and its neighboring cork oak forests are home to Barbary deer, the black vulture, the Iberian eagle and the endangered Iberian lynx. The woodlands also provide sustenance and protection for millions of migratory birds.

Ryel, who made one visit to Portugal this past fall and plans at least two more trips during his three-year Fulbright stint, is studying water dynamics in the soil and investigating ways to discourage shrub encroachment.

“Economics is a key element of how landscapes are managed,” he says. “If certain practices are no longer economically viable and are abandoned, how do you deal with the consequences?” 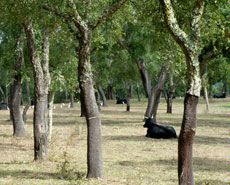 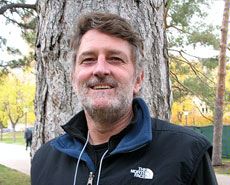