Ecologists continuously wrestle with a simple question without a simple answer, says Utah State University researcher Chuck Hawkins. How many species live in one place versus another and why?
Looking beyond traditional methods used to tackle this query, Hawkins and colleagues Yong Cao, a former USU research scientist currently with the Illinois Natural History Survey, and David Larsen and John Van Sickle, both with the U.S. Environmental Protection Agency’s Western Ecology Division, propose a more accurate approach in the September 2007 issue of The American Naturalist.
Knowing how numbers of species change over time and space is critical for developing and testing ecological theory, planning management programs and determining the impact of humans and other factors on specific ecosystems, says Hawkins, professor in USU’s Department of Watershed Sciences and director of the Western Center for Monitoring and Assessment of Freshwater Ecosystems.
“However, in very few instances do we ever really know how many species are present at a location because conducting censuses is impractical,” he says. “We must rely on sample data to estimate relative differences between locations.”
Ecologists typically rely on one of two statistical methods to compare species richness among sites, Hawkins says. One method, rarefaction, involves estimating relative differences in the number of species among sampling sites. This is done by standardizing species counts at each site, either by the area sampled or by the number of total individuals sampled.
“The problem with rarefaction is that you have to make a critical assumption – that the proportion of individuals associated with common and rare species is the same across the locations you are comparing,” he says. “And that’s rarely the case.”
The second method – use of statistical estimators – presents “an even nastier statistical problem.”
“With this approach, you try to predict what the true species richness is by mathematically extrapolating from the sample data,” he says. “Some of these extrapolation techniques work better than others, but all are either relatively imprecise or sensitive to the same assumption are rarefaction.”
What Cao, senior author on the project, figured out, Hawkins says, is a way to standardize estimates of species richness based on estimates of the similarity of replicate samples to each other at a given site. This novel approach is called standardization of sampling effort on mean taxonomic similarity among replicate samples or, more simply, MRS. It uses comparisons of species composition among samples collected at individual sites to estimate the proportion of true total species richness that is detected with increasing sampling effort.
“You go to a site and take a series of replicate samples,” says Hawkins, who leads efforts to develop and implement scientifically sound methods for monitoring and assessing the condition of aquatic resources throughout the western United States. “You then estimate the number of these replicate samples it takes to achieve a specific MRS value at each site. Then, you compare the number of species across sites standardized by a common MRS value – rather than area sampled or individuals counted as is typically done.”
The good news, he says, is that the MRS approach appears to offer a more effective method of estimating true differences in species richness than traditional methods and can be applied across different types of ecosystems to make meaningful comparisons. The downside is that the new method requires “a bit more sampling effort in the field followed by pre-analyses in the lab to ensure you’ve sampled enough.”
“Unlike traditional methods, you can’t use a simple sampling protocol based on a common sampling effort,” Hawkins says. “But you can achieve more accurate results.”
Ultimately, the MRS technique should aid ecologists in their quest for more reliable knowledge about patterns of species richness and diversity, along with the causes of those patterns, he says. “The method should lead to better sampling designs for use in both biodiversity surveys and bioassessments of ecosystem health.”
Related links:
Contact: Charles P. “Chuck” Hawkins [chuck.hawkins@usu.edu], 435-797-2280 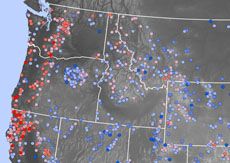