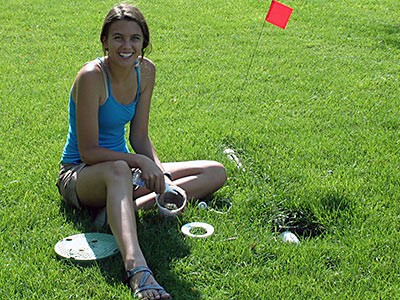 The weevil’s “gotta have a home” insists the traditional blues song made popular in the 20th century by such artists as Lead Belly, Bessie Smith, Tex Ritter and Brook Benton. The classic tune refers to the boll weevil, a scourge of southern cotton farmers. Its cousin, the billbug, a weevil found throughout North America also wants a home, but in turfgrass found in millions of residential and commercial lawns, golf courses, sports fields and parks.

At least ten species of billbugs feast on turfgrass in the United States, causing millions of dollars in damage, yet limited information is available to those who seek to manage the pest.

“The information on billbugs is very regionally limited, so if you’re living in a region where there hasn’t been a lot of research done on billbugs, you may find that the fact sheet available to you are relying on information from another region that is not necessarily applicable,” says USU Biology doctoral student Madeleine Dupuy.

Dupuy, with USU colleague Ricardo Ramirez, associate professor in the Department of Biology and the USU Ecology Center, and a USU Extension entomology specialist, published findings that shed new light on billbug management in the April 2016 issue of the Journal of Integrated Pest Management.

Less than an inch in size and usually brown or black in color, adult billbugs, often referred to as “snout beetles” sport elbowed antennae and a long, downward-pointing proboscis with chewing mouthparts. After hatching, their larvae feast on grass stems and move down into the soil, where they consume grass roots and crowns, which can eventually kill turfgrass plants.

“Cultural and biological control methods deserve a closer look,” she says. “For example, if you have a problem with billbugs in one part of your golf course every year, you might consider overseeding that area with a resistant variety of turfgrass, such as a resistant Kentucky bluegrass cultivar or an endophyte-enhanced rye grass or fescue.”

Another option is to encourage growth of existing populations of the billbug’s natural predators, such as ground beetles and wolf spiders.

“There is a diverse and well-documented predatory arthropod community inhabiting managed turfgrass, and some studies have shown these existing populations to have beneficial impacts on pest populations,” Dupuy says. “In our studies using linear pitfall traps, we have seen adult billbugs wrapped up in spider’s silk with their insides sucked out.”

She and Ramirez aren’t sure if this represents opportunistic feeding — just because the spiders and billbugs were trapped together — or if the spiders also feed on billbugs in the wild.

“In any case, wolf spiders are definitely out there and abundant, so examining predation of the spiders on billbugs definitely deserves more research,” Dupuy says.

To keep billbug predator numbers high, she suggests planting strips of bunch grass and flowering plants, which provide habitat for spiders and beetles.

“Flowering plants are also an excellent attraction for wasps, some of which also feed on billbugs,” Dupuy says. 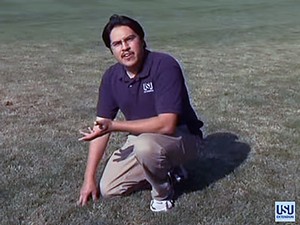 In a USU Extension video, entomologist Ricardo Ramirez, associate professor in the Department of Biology and USU Ecology Center, explains how to identify billbug damage in turfgrass. 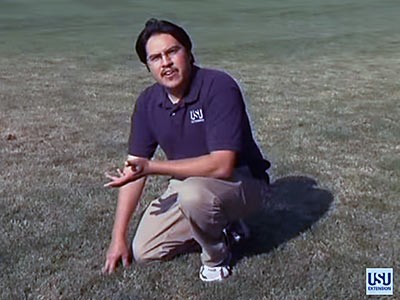